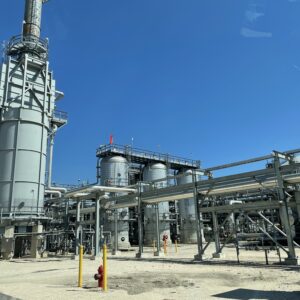 During a tour of a natural gas liquids facility near Houston, retired Maj. Gen. James A. “Spider” Marks said the facility may generate energy, but what it’s really producing is national security.

Marks was part of a media tour of the Nederland, Texas plant — the second-largest natural gas liquids (NGL) export facility in the world — organized by the GAIN (Growing America’s Infrastructure Now) Coalition, where he serves as a strategic advisor. And while the technical talk focused on production capacity and job creation, their overall message was the value of domestic energy production in an era of international uncertainty and supply chain disruptions.

Opponents of increased fossil fuel production argue that the risk from carbon emissions on the climate outweighs other geopolitical concerns.

“The number one task is to reduce emissions because we are now using the thin shell of atmosphere surrounding our planet as if it were an open sewer,” former Vice President Al Gore told legislators gathered for the  Cop26 summit in Glasgow, Scotland last week. “We must put the period of delay and distraction and expedience in the past, recognize that we have entered a period of consequences, and make it a period of solutions.”

But with major powers like China and Russia declining to even participate in the Cop26 global warming summit, energy competition and production are going to remain challenges for the U.S., most experts agree.

President Joe Biden has made the reduction of fossil fuel use a centerpiece of his environmental policy. His plan calls for cutting greenhouse gas emissions 50 to 52 percent below 2005 levels, reaching a 100 percent carbon pollution-free power sector by 2035, and achieving a net-zero economy by no later than 2050.

Marks thinks it is short sighted to discount fossil fuels. There may be a need to phase out carbon-emitting fuels, but it will take time to get viable — and reliable — alternatives on the market

“The path to get there is through fossil fuels,” Marks said, in particular natural gas.

And, Stevens notes, Biden’s policies limiting U.S. production come at the same time he’s urging other nations to produce more oil and gas. Instead, OPEC nations and their allies have responded by limiting increased production to just 400,000 barrels a day in December, about half the amount the Biden administration demanded.

And Biden’s energy secretary, Jennifer Granholm came under fire for laughing at a reporter’s question about her plan to boost U.S. oil production. “That is hilarious,” she said. “Would that I had the magic wand on this.”

The debate over discouraging domestic production has taken a turn in the past few weeks as consumers struggle with higher gasoline prices, rising inflation and, according to the U.S. Energy Information Administration (EIA), higher heating costs coming this winter. Nearly half of U.S. households use natural gas for heat, and they’re facing an average price hike of about 30 percent. For Americans using home heating oil and propane — which make up a majority of households in parts of the Northeast —  costs are expected to increase by 54 percent and 43 percent respectively, the EIA says.

Energy Transfer’s NGL Export Terminal has three refrigeration units with a combined capacity of approximately 700,000 and refrigerated storage capacity for over 3 million standard barrels of ethane, propane, butane and natural gasoline. With six shipping docks and the ability to load a cargo ship with 500,000 to 600,000 barrels of product in about 30 hours, the terminal keeps its 200 employees working 24 hours a day.

Vicki Garnado, vice president for communications at Energy Transfer, said this is the first time the company has opened up its doors for a press tour.

“We thought it was a good opportunity for people to see what an important asset it is,” she said.