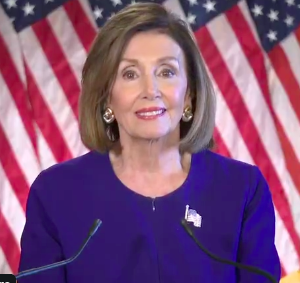 Charlie Cook is a well-respected analyst whose Cook Political Report is a must-read for campaign pros on both sides of the aisle. And his take on the released transcript of Trump’s Ukranian phone call?

“I don’t Tweet very much but reading the transcript has moved me to comment,” Cook tweeted. “I was totally underwhelmed by the transcript. After the build-up, [there] was not much more inappropriate said than we hear from him in a typical week. This will not move malleable voters.”

While Democrats, and even some Republicans, offer high-flung rhetoric about threats to the Republic posed by President Trump’s phone call, political consultants and campaign strategists are trying to determine the practical impact of the Ukraine story on the average–or as Cook called them, “malleable”– American voter.

The early betting is that Democrats don’t have enough to turn the Ukraine story into a political winner–yet.

Thanks to President Trump releasing the transcript, the facts about the Ukraine phone call aren’t in dispute. Democrats say that, while there may be no specific quid-pro-quo arrangement mentioned, Trump’s request for help from a foreign government to look into former Vice President Joe Biden, a likely 2020 opponent, is enough for impeachment.

“There is no requirement there be a quid pro quo in the conversation,” Pelosi said Tuesday.

“Even if there were absolutely no quid pro quo, the demand itself is a betrayal of the presidency and abuse of the office,” Sen. Richard Blumenthal (D-Conn.) followed up on Wednesday.

And, some Democrats believe, this will motivate their base. “If a highly motivated person drags her mother and her husband and her second cousin twice removed to the polls, then it makes a difference,” Iowa Democratic Party activist Kurt Meyer told Reuters.

Republicans like Sen. Lindsey Graham disagree.  “This is a nothing (non-quid pro quo) burger,” he tweeted, later telling reporters: “From my point of view, to impeach any president over a phone call like this would be insane.”

Who’s right? For Team Trump, the answer is obvious:

Hoax or not, is the Trump campaign right to believe the Democrats’ rush to impeachment will help keep him in the White House?

“I predict Trump’s base voters are going to go up about 20 points in intensity now that Democrats are actually starting the impeachment process,” DC GOP strategist Alex Vogel told InsideSources, while “independent voters are fundamentally focused on how this country, and in particular, how our economy is working and putting food on their tables and cars in their driveways.

“Independents don’t seem to have shifted much in response to any of this – and I don’t think that is going change,” Vogel said.

“The bottom line is the impeachment inquiry will ultimately hurt Democrats,” said New Hampshire-based GOP consultant Michael Dennehy, a veteran of the John McCain presidential campaigns. “Middle America will be asking every day, ‘what about my healthcare? What about illegal immigration? What about the opioid crisis? Why are we spending everyone’s time on impeachment rather than these issues?'”

Republican strategist Doug Heye sees a similar problem for the Democrats’ 2020 field. “For Democrats running for president, breaking through on healthcare or the economy just got a lot tougher. Impeachment will be the dominant topic for a long time,” Heye said.

One area where impeachment is already paying off for the GOP–literally–is fundraising. Trump 2020 and the Republican National Committee sent out a slew of fundraising emails on Tuesday on behalf of what they’re calling the “Official Impeachment Task Force.” According to Politico, they raised about $1 million by the end of the day.

And while it’s too early to have polling of the public’s reaction to the transcript itself, a new Quinnipiac survey taken as the story was unfolding found that a solid majority of Americans– 57 percent — don’t want Trump removed from office, while only 37 percent support it.  More significant, only 34 percent of self-identified independent voters, whose views are more likely to be “malleable” during the coming campaign, support impeachment.

Democratic consultant Joel Payne, who worked on the Hillary Clinton 2016 campaign, sees the issue as a wash. “Both parties’ bases were amped up already,” he tells InsideSources. “I think this fight just keeps them both on track. The question is how moderate voters react to impeaching President Trump. Which side will win the message war? That remains to be seen.”