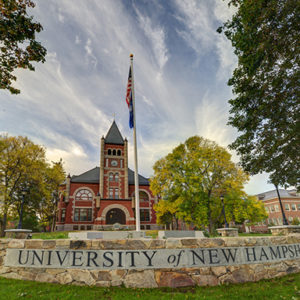 It hasn’t been a banner year for the University of New Hampshire. Racist incidents have gripped the campus since the beginning of the academic year, and in the past two weeks alone, there have been several allegedly racist incidents on the Durham-campus, prompting a response from university officials.

It all started on May 5, or Cinco de Mayo, when a fierce debate began after a white student, named Michael, wore a serape, or poncho, to celebrate the holiday.

Michael was confronted by sophomore student Danique Montique, who recorded her encounter with him, questioning why he needed to wear the garb to party.

She posted the confrontation on Facebook, which immediately went viral.

“[I] was utterly disgusted with students who chose to demean and appropriate Mexican culture,” she wrote on her page. “It’s about you as a man — a white man, who has the most privilege in this whole fucking country — knowing what’s happening in this country right now,” she said in the video.

Thirty-one professors signed on to a letter after the incident, condemning students for cultural appropriation and congratulating those who are calling out their peers.

“We applaud all of you who have worked, tirelessly and without compensation, to articulate why it is hurtful to engage in cultural appropriation and stereotyping,” the letter states. “The climate for social justice has been fragile in recent months, and we need to support each other.”

On May 11, another student was criticized for wearing “blackface” in an online photo, but Eric Buchwald said it was a clay mask for his face.

The image of Buchwald, wearing a dark-gray clay mask was posted to Instagram by another user without his knowing, with the caption, “as a black woman, I was forced to become the very thing society deemed me to be; angry.”

As a result of rising racial tensions on campus, school administrators hosted an open forum Thursday for students to express their opinions.

“There are a lot of undertones of racism here at UNH,” said Jubilee Byfield, a 21-year-old student from Portsmouth. “I do believe you sincerely want to help us, but it’s not enough at this point and it needs to be more.”

Students urged administrators to do more to address concerns felt by students of color, who only account for less than 10 percent of the UNH student body.

Yet, the incidents didn’t stop after that meeting. Over the weekend, swastikas were found drawn on the wall of a residence hall. Then, a student government representative was fired for uploading a picture of a friend in blackface. The n-word in capital letters defaced a noticeboard in a freshman dorm that was directly opposite the office of a black teacher. The words on the noticeboard “be an ally” were rearranged to read “be anal.” The final incident so far was a Snapchat video circulating of a white student in a crate, singing “Amazing Grace,” which some people have taken to be racist since the hymn has connotations to slavery.

“Everyday you wake up to something new,” Montique told The Tab. “I can’t study because I haven’t had time to process anything. I’m tired. I can’t eat, or sleep. This is affecting my mental state at this point. It’s affecting a lot of POC mental states. It’s draining.”

Huddleston emailed a letter to faculty and students after the recent string of racist incidents, saying “together we can build a better UNH.”

“In recent days, in light of the media attention that these issues have received, some are seeking to inflame the situation further by being provocative and rude, especially on social media,” he wrote. “We encourage you to be mindful of this potential for manipulation and not to engage with people who use the Internet to spread hatred and disrespect.”

This isn’t the first time that UNH has been rocked by racial incidents. During the 2016 presidential election, two UNH students, who were Donald Trump supporters, counter-protested a walkout dressed as Harambe and Richard Nixon. A former UNH professor posted a photo of the two students, writing that the Harambe costume was “harassing, intimidating, and racist.”

A Facebook page titled “All Eyes on UNH” was set up to “expose injustices” on campus. They’ve also posted a list of demands, which calls for  “administration and town elected officials” to urge “local stores in Durham to stop carrying items like ponchos and sombreros for May 5 celebrations, and instead seek out alternative sources of revenue.”

The list of demands also calls for the “creation of a campus-wide committee to prevent similar offenses in future years,” with another demand asking Greek-life leaders to “find other ways to celebrate the end of the academic year.”

“Many people on campus were uncomfortable and infuriated by the behaviors of those [who] decided to appropriate Mexican culture, which has cause a campus-wide conversation about the effects of appropriation and racism,” according to the press release. “It is possible to change the drinking culture at UNH, but it takes confrontation, actions and hard conversation to do so.”

Huddleston announced that he would be leaving his position as university president at the end of the 2017-2018 academic year. How he responds to these incidents and the demands of his students could determine his legacy.