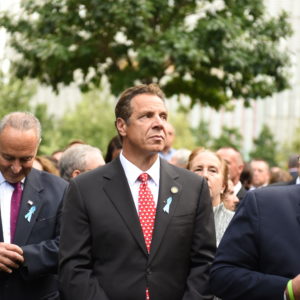 New York Democratic Governor Andrew Cuomo was bashed by a union watchdog Thursday for proposing funds for a labor school in the state budget.

The Center for Union Facts (CUF) attacked the plan in a paid advertisement as part of a larger campaign it launched in the state. The full-page ad, which appeared in the New York Post, denounced a plan to provide $1.5 million in the budget for next year to help in the creation of a School of Urban and Labor Studies.

The School of Urban and Labor Studies would be part of the City University of New York. The CUF criticized the proposal for being designed around educating students from a pro-union perspective at the expense of taxpayers. The group argues that money could be better served on things like the Metropolitan Transportation Authority (MTA).

“Governor Cuomo’s $1.5 million labor school is certainly music to union leadership’s ears, but it’s paid for with taxpayer money that could have been spent funding the MTA and improving the subway,” CUF Communications Director Luka Ladan said in a statement provided to InsideSources. “While the governor hands out $1.5 million gifts to his union buddies, subway riders are forced to cope with rat-infested stations and delays across the city. Their money would go a longer way buying rat traps than bankrolling union propaganda.”

The full-page advertisement was released as part of the Subway Scam campaign which was launched by the union watchdog March 22. The campaign argues that union contracts have increased transit construction costs unnecessarily while taking needed resources away from subway repairs and upgrades.

The ad accuses the governor of prioritizing union demands over needed subway repairs. While he focuses on union handouts instead of confronting soaring transit costs, the campaign argues, the transit system is expected to face a $1 billion deficit in 2021.

The Subway Scam campaign argues that construction union contracts have allowed for excessive wages and overtime pay. The campaign is intended to educate the public on what the group sees as overly expensive union contracts and wasteful spending–which have caused construction delays and increased costs for riders.

The Building and Construction Trades Council (BCTC) of Greater New York oversees over a dozen local unions who represent subway construction and maintenance workers. The union responded to the campaign by questioning the legitimacy of the union watchdog and its backers.

The New York Times helped spark the campaign by uncovering some of the alleged costs in an article Nov. 18. The article states that generous agreements with labor unions and private contractors have hampered efforts to add new lines. It adds the inflated construction costs are five times the international average.

Cuomo did not respond to a request for comment by InsideSources.