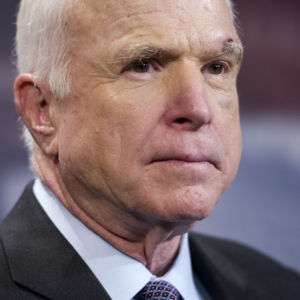 Republican lawmakers have struggled to honor their biggest campaign promise to repeal the Affordable Care Act. Senate leadership attempted to pass a ‘skinny’ repeal to parts of the health law after earlier efforts to replace the law failed. The hope for even a simple repeal was quickly dashed with three Republicans defecting.

McCain rushed back to Capitol Hill to vote earlier this week after being diagnosed with brain cancer. He gave opponents just enough votes by rejecting the skinny bill. Republican Senators Lisa Murkowski and Susan Collins also voted no. Their decision to kill the skinny repeal bill has earned them praise from the labor movement.

“We are grateful to the Democrats for their efforts to defeat this bill and to Sens. Murkowski, Collins and McCain for the courage they showed to oppose it,” American Federation of Teachers President Randi Weingarten. “Now is the time to turn the page and work together to improve healthcare for all Americans, not to repeal it or take it away.”

The Arizona AFL-CIO took to social media to thank McCain. The union called him a “maverick” as he was long known earlier in his career to be outspoken against some GOP policies. Communications Workers of America President Chris Shelton also thanked the three defecting senators for saving millions from losing insurance.

“CWA commends the members of the U.S. Senate – 48 Democrats and three Republicans – who put the well-being of the American people front and center,” Shelton said in a statement. “The bill would have stripped health care from 16 million people, raised health care costs for millions more and destabilized our health care system.”

The skinny repeal bill was significantly scaled back compared to the earlier efforts. It would have ended the individual mandate and temporarily reduced the employer mandate and the medical device tax. The bill would also have defunded Planned Parenthood for one year.

Labor unions have been vocal critics of the efforts to repeal and replace the Affordable Care Act. They have held protests and supported opposition campaigns against the effort. Union leaders praised their members and other critics for helping to kill the bill by protesting and calling their lawmakers.

Republican leadership is now left with no clear path forward with their skinny bill being essentially a last ditch effort. The Senate rejected a clean repeal earlier this week that would have upended Obamacare without a replacement. The clean repeal came after an earlier failure to repeal and replace the law.

The Service Employees International Union (SEIU) is turning its attention to those lawmakers that voted in support of the repeal bill. The union is joining other groups on the left in a campaign to unseat those lawmakers during the next election. The campaign will be officially launched Saturday.