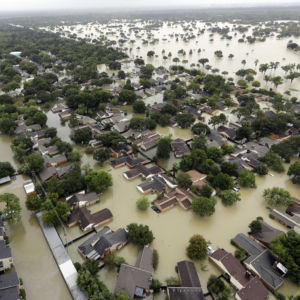 The country has been battered with a string of hurricanes that have left southern states and territories in ruin. But from the destruction arose individuals and groups determined to help those in need. Labor unions were one such group that rallied together to do what they could to help the massive effort.

The Teamsters were able to put their resources and connections together to collect supplies and transport them to areas in need. Teamsters Local 988, in Southern Texas, established a relief center in a warehouse where they coordinated with groups from across the country in response to Hurricane Harvey hitting the state.

“This isn’t our first disaster relief here in the Houston area,” Teamsters Local 988 President Robert Mele told InsideSources. “We had gone through this with Hurricane Ike. But it was kind of more in a specific area, not throughout the whole region that we represent.”

Mele also serves as the president of the Teamsters Joint Council 58 which oversees local chapters in Southern Texas. Hurricane Harvey impacted nearly all of his members across the region. He adds it was also different compared to previous hurricanes because so much of the destruction was brought on by heavy rain and flooding.

“Once the storm had cleared, it’s common that other mobile units will call and offer assistance, and it was the same thing that happened this time except on a much grander scale,” Mele said. “Literally all four corners of the United States were coming in trying to help, not just our local, but the citizens of Houston and the surrounding areas.”

Mele and his members started to prepare when they heard the hurricane was approaching. Once the hurricane had hit, the first step was securing a space where they could bring in supplies for those in need. R2 Corporation provided them a large warehouse which the union was able to setup in once the storm had passed.

“When we figured out these hurricanes were coming it, it was pretty scary because I’m thinking, how are we going to handle this,” Mele said. “We started searching for somebody who would either lease us space or donate space for a warehouse. We happened to walk into a place that had no union exposure at all. Knew nothing about unions.”

R2 Corporation was in the midst of expanding into Houston from Austin when the hurricane came. The company had already donated the space to first responders so they could safely keep their supplies as they awaited the hurricane. Once the hurricane had passed, the company then turned the warehouse over to the union.

“It was really a blessing that this company didn’t have a preconceived notion of what unions were,” Mele said. “We just sat down and talked about it, and we both were on the same page. We wanted to do something to help, not only our members, but the community, and we got this warehouse space given to us.”

The Teamsters were able to start collecting supplies once they had the space. Trucks from across the country arrived from other local chapters and various groups hoping to help. R2 Corp. management had planned on moving into the space around Labor Day but instead kept all the new equipment in Austin to keep the facility clear.

“We had just opened up a new facility in the Houston area, and we did not get flooded,” R2 Corp. President Ed Garcia told InsideSources. “The Teamsters were able to bring materials in, store them, and distribute them out to the needy in Houston.”

R2 Corp. specializes in repair, asset recovery, and environmentally friendly recycling solutions. The new facility covered 81,000 square feet between its warehouse and processing center. The first responders originally used the facility to sleep, store their boats, vehicles, and the other supplies as they awaited the storm.

“The opportunity was there and we were able to open it up,” Garcia said. “The Teamsters were great to work with. I’m on the management side and it was great to see them, the outpouring of what they did for the community and their fellow brothers.”

The Teamsters then started focusing on getting supplies to their members and the community. The warehouse gave them the space to unload supplies, organize them, and then distribute them. The operation needed to be efficient and fast because many people were in a dangerous situation.

“We had to get these trucks unloaded,” Mele said. “Then we had to have the space to sort through and separate all the stuff that people needed so we could get it out. We did not want to be a warehouse. We wanted to be there for disaster relief. So when things came in, we wanted to sort it, we wanted to get it to our members, but also to the community, what they needed.”

Mele recalls how they couldn’t even get into their own building when the hurricane first cleared because of the destruction. But they were able to start moving into the warehouse within the first couple days with the first responders leaving so that they could help in the rescue effort.

The George R. Brown Convention Center was setup as a nearby emergency shelter for Houston area residents. The convention center is large enough to shelter thousands of people. The Teamsters started coordinating with officials at the shelter early on when they were having trouble uploading trucks.

“We would receive calls from people working at the George R. Brown, from a state senator, or the mayor’s office asking us for assistance,” Mele said. “We got a desperate call from the mayor’s office asking for forklift drivers. They said at the George R. Brown they had opened a shelter, and they have all these trucks showing up that they can’t get unloaded.”

Mele didn’t have forklifts around but knew people who did. He quickly turned to social media knowing that the convention center needed help as quickly as possible. The plan worked as nearby people who had access to forklifts quickly started showing up.

“I put it on Facebook, believe it or not, that they are in desperate need,” Mele said. “In about 30 minutes later we got a call saying ‘please stop sending forklift drivers because they were all showing up.’ And then the next day, maybe a day and a half later, I get a text that says ‘Robert, these guys on these forklifts, they’re amazing. The way they can get this stuff off and separated, it would take us days to do what we do in just a few minutes.'”

The Teamsters hit the ground running and were soon distributing supplies to members and other local residents. The union also coordinated with other groups to get them supplies and necessary equipment. At one point the union began sending trucks directly to the convention center.

“We had some trucks come in from Boston, and we had a call from the mayor’s office that they needed water, supplies, and diapers for the George R. Brown,” Mele said. “Those trucks were sent to the George R. Brown so we could help the community.”

The Teamsters were able to setup and hit the ground running quickly despite earlier concerns. But some groups trying to help weren’t as lucky. They noticed what the union was able to do, and turned to them for assistance so they could start helping people too.

“Some of these other locations that were trying to setup the same type of operations were then coming to us saying. ‘how do we do this because we have very good intentions, we have a lot of stuff coming in,’ but they didn’t really know what they were getting into,” Mele said.

Mele recalls how one relief center was setup in a warehouse that dated back to somewhere around the 1940s. The building had clearly not been used for many years. It was dirty and had not been updated to include necessities like a loading dock.

“It was filthy in front, first of all, the second thing is they didn’t even have a dock,” Mele said. “So they were backing up semi-trucks, and they were unloading from the truck to the ground. You can’t do it like that. If you do it like that you’ll be here for years just trying to get it all separated.”

Mele notes that different areas across the region are recovering at a different pace. Some areas are still in desperate need. But he notes they are generally now in the phase of helping their members start to rebuild their homes. They still have a lot of work to do, but are moving forward.

The Teamsters Joint Council 58 and its local affiliates weren’t the only unions trying to help people in need. Harvey was followed by hurricanes Irma and Maria which caused immense damage across Florida, Puerto Rico, and other areas around the Gulf of Mexico.

The Texas AFL-CIO coordinated with other unions and local affiliates to help as well. The union established a worker relief fund to directly support union members, community allies, their families, and neighbors. It has also listed volunteer opportunities so members who can help are able to.

The Communications Workers of America held a fundraiser to raise money for families impacted by the storm. The American Postal Workers Union, the International Longshoremen’s Association, and others have also raised money to help people in need.