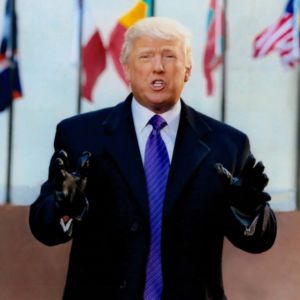 Trump issued the revised executive order after the first one was defeated in the courts. The administration has argued the temporary travel ban is designed to protect the country from terrorism. The Service Employees International Union (SEIU) and other critics argue the revised order still discriminates against Muslims.

“Americans will not be fooled,” SEIU International Executive Vice President Rocio Sáenz said in a statement. “It is clear that President Trump is repackaging just another version of the same discriminatory and hateful executive order that courts around the country rejected over and over again last month.”

“In fact, it aggravates the threat by alienating the very people at home and abroad whose cooperation and support we most need,” UFW President Arturo Rodriguez said in a statement. “The revised Trump executive order is nothing more than a stark appeal to irrational ignorance, prejudice and fear mongering.”

Trump has argued the executive order isn’t about religious discrimination. He counters it’s really about safeguarding against regions known for terrorism. He also notes the seven countries included in the executive order have previously been identified by the last administration as sources of terror.

“America is a proud nation of immigrants, and we will continue to show compassion to those fleeing oppression, but we will do so while protecting our own citizens and border,” Trump said Jan. 29. “To be clear, this is not a Muslim ban, as the media is falsely reporting. This is not about religion – this is about terror and keeping our country safe.”

The executive order also calls for more aggressive vetting procedures. The original executive order was met with fierce opposition when it was signed Jan 27. It faced several lawsuits and was eventually blocked by the Ninth Circuit Court of Appeals.

“President Trump’s ban impacts individuals who want to contribute to this great country, taking care of our families by becoming doctors, creating new technologies to improve our lives, and doing good for our country,” Sáenz also said. “It impacts individuals who followed the rules and were in the midst of applying to come to America but whose applications had not yet been approved.”

The executive order is designed to restrict travel for 90 days and suspend admission of refugees for 120 days while vetting procedures are reviewed. The administration wants to ensure people from those countries can be properly vetted before it lifts the restrictions. It has noted concerns terrorists might infiltrate refugee and immigrant populations to get into the country.

The executive order makes a few changes and clarifies some language. It will not revoke existing visas approved before it goes into effect March 16. It also does not explicitly apply to lawful permanent residents and green card holders.

The SEIU pledged to fight the administration and its executive order. Labor unions and activists have already held numerous protests against the policy with more likely to come. Protesters converged onto airports and cities across the country when the original order was first signed.