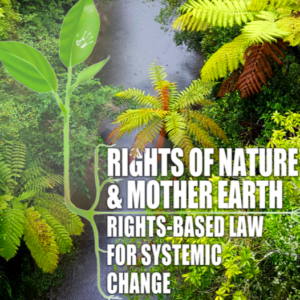 Do Lakes Have Legal Standing To Stop A Pipeline?

Should a river have the right to sue?

That’s the theory behind the “Rights of Nature” movement being embraced by green activists fighting against energy infrastructure expansion and other projects. At least one national environmental organization is promoting the theory and testing it in local jurisdictions around the country.

For example, local activists in New Hampshire opposed to a proposed natural gas pipeline passed an ordinance in the town of Exeter, N.H. declaring “the right of ecosystems to exist and flourish.” According to Citizen Action for Exeter’s Environment and the Community Environmental Legal Defense Fund (CELDF), the two groups behind the ordinance, the vote was a blow by citizens against corporations on behalf of the environment.

“Our right to a healthy climate is an unalienable right. Any new energy infrastructure in our town must align with that right,” said Maura Fay, co-founder of the community group Citizen Action for Exeter’s Environment. “We live here, and what we envision for our community comes before what any project developer and state government envision if it threatens our rights.”

And not just the rights of residents, but of the lakes and rivers themselves. CELDF argues for “recognizing in law the right of nature to be healthy and thrive,” according to their website.  And they mean it, too. CELDF recently led a successful campaign in Toledo, OH to recognize the right of Lake Erie to “exist, thrive, and naturally evolve.”

“This is the first in the nation in terms of rights-of-nature law being adopted by a municipality over a certain ecosystem, and I think it’s the beginning of more things to come in that area,” said Thomas Linzey, of CELDF after the election.

Some of the citizens impacted by these efforts are pushing back. In late February, the Drewes Farm Partnership, a farm south of Toledo, filed suit in federal court against the measure. Area farmers are concerned that under the law they might face lawsuits over surface water runoff from fertilizer and manure even if they are otherwise following applicable state law and industry best practices. The Drewes suit argues that the Lake Erie Bill of Rights referendum exceeds the authority of the City of Toledo and violates their rights under the First Amendment, Equal Protection Clause, and Due Process Clauses of both the Fifth and Fourteenth Amendments.

While they await a court ruling, CELDF and Toledoans for Safe Water (TSW) are defending the ballot measure.
“If you’re going to court to try to overturn the legal rights of the lake, that means either you don’t support Lake Erie’s right to exist and thrive, or you want to conduct environmentally harmful activities that will violate those rights,” said Markie Miller of TSW.

The most fundamental legal challenge the “Rights of Nature” activists face isn’t the novelty of their view of inanimate objects as potential plaintiffs but the more mundane legal concept of the Supremacy Clause, which dictates that federal law supersedes state and local regulations, which in turn generally prevents towns from setting their own environmental policies.

A 2017 CELDF push for an anti-fracking ordinance in Youngstown, OH failed at the ballot box, for example, but many observers noted that it was likely an unconstitutional attempt to impose an environmental policy at the city level that contradicted state and federal regulations.

The same is true back in Exeter, N.H, where the town’s attorney responded to the vote in favor of the “Rights of Nature” ordinance by telling the town government to ignore it.  The ordinance “attempts to sweep away generations of state and federal court decisions that have recognized the superiority of our state and federal constitutions,” attorney Walter Mitchell wrote the town manager after the ordinance was passed. “Should the town be requested to enforce the ordinance in the future, I would…advise that no action should be taken.”

In all of these cases, rights of nature are used to add a party to the environmentalists’ side of the lawsuit. The growing number of lawsuits also means that the legal theory behind awarding rights to non-human entities will likely be settled in court.