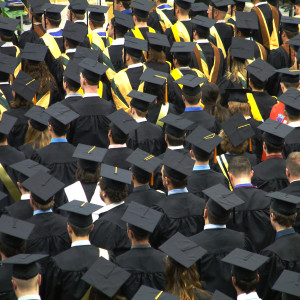 Urge Graduates to Create a Culture of Kindness and Respect

Graduates will enter a country offering boundless opportunity. More than ever before, they will have the ability to define and pursue their own versions of happiness. But they know that already. They’ve been hearing calls to lean in and dream big throughout their lives. American society today does not lack for people eager to make a difference.

What we lack today is a culture of kindness. We’ve lost the ethic of encouraging people to respect others, even those with whom they disagree.

Brené Brown, author of “Braving the Wilderness: The Quest for True Belonging and the Courage to Stand Alone,” would be an ideal graduation speaker to advance this urgently needed message. In this book, she highlights trends with which recent grads are likely to be all too familiar: Our increasingly polarized culture and public debates; the increased isolation and loneliness that too many people today feel.

Brown notes the irony that our ability to sort ourselves, so that we are surrounded by those who share our beliefs, hasn’t made us feel a greater connection with our community. Rather, it has left us feeling disconnected. Political debates today seek not just to convince people that those with different views are wrong but that they are untrustworthy, ill-intended and even less human. Our lack of interaction with people with different views makes it easier for us to accept attempts to objectify and humiliate them.

Social media — which is increasingly a primary vehicle for interacting with others and expressing our political beliefs — has driven this lack of civility. People who would never consider insulting someone to their face or using profanity among strangers feel free to insult and denigrate others with the anonymity of being online.

The next generation ought to be reassured that it doesn’t have to be that way. Brown urges people to have the courage to reject the tribalism that is at the core of this desire to put others into out groups. She counsels people to “move in,” and recognize other people as unique and vulnerable human beings. It’s much harder to hate someone from up-close.

Another important message for new graduates that Brown shares is to remember that it’s OK not to have all the answers. You don’t need to pretend to have an informed opinion about everything. No one does. Recognizing what you don’t know is a sign of thoughtfulness and maturity. Don’t be afraid to ask questions, rather than offer your opinions, during a conversation. You’ll learn from the process even if you don’t agree with everything the other person shares.

Brown urges the public to reject the false dichotomy of having to pick sides, as if the world and every debate is divided neatly into two competing teams. Life is more nuanced and complicated than that. It takes bravery and maturity to step out from the pack and refuse adopting wholesale the positions and assumptions in “your” group. Being willing to reject both extremes and stand alone is central to maintaining your integrity and true individuality.

New graduates should look for opportunities for real connection. Social media and sharing pictures is no substitute for sharing actual experiences with someone.

Brown highlights the power of joining with groups for big celebrations or sharing times of grief. Maintaining a connection to society more broadly is important just as it’s important to maintain deep personal friendships and relationships. This connection to humanity is a foundation of mental and physical heath, and overall well-being.

New graduates don’t need to hear about chasing their dreams and fulfilling their potential. But they do need to be reminded that kindness and conviction can stand together, and help build a better future and stronger society; that standing up strongly for your beliefs doesn’t require attacking or belittling others.

Rebuilding civil discourse and a culture of respect is among the great challenges facing graduates, and they should be encouraged to recognize this as a vital and worthy goal.

Carrie Lukas is the managing director of the Independent Women's Forum. She wrote this for InsideSources.