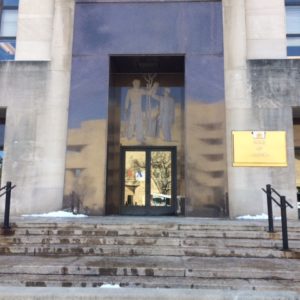 When Voice of America first broadcast into western Europe, it was a light against the growing threat of Nazi expansion and declining freedom of the press around the world. That was 75 years ago. In the following decades, its radio and later television broadcasts presented western news to the Soviet bloc. Even after the fall of the Soviet Union, Voice of America broadcasts continue, bringing news about both the United States and regional countries to more than 236.6 million people in 2016. Supporters call Voice of America a success story in public diplomacy, meanwhile others question if the United States needs to support its own broadcasting station given the proliferation of the Internet.

“After the cold war there were people who said: Why do we need this anymore? The cold war is over, new technology exists,” said Geoffrey Cowan, a former director of VOA during a advisory commission meeting on Thursday. “Who needs Voice of America when we have fax machines and CNN?”

“Fax machines and CNN are great for people who live in hotels and speak English. But most people don’t,” he said, answering his own question.

Voice of America is unique in that it broadcasts in 47 different local languages, providing an American perspective to regions of the world which would not otherwise be exposed to American culture, government, politics, or news. Amanda Bennett, a Pulitzer-prize winning journalist now serving as director of Voice of America, explained that many foreign audiences have deep curiosity about the United States and trust Voice of America to provide accurate information.

“There is still a very deep reservoir of interest and affection for the United States that we are tapping into,” she said. Voice of America programming gives a glimpse into the American system of government and how it functions. That itself helps to promote the spread of democracy and liberty. These moments can come from programs that Americans would find commonplace. Even broadcasting the inauguration, she explained, sparked conversations in Thailand about police protecting the safety of protesters, rather than beating them.

But is soft power alone enough to justify the $224.4 million that the Broadcast Board of Governors has requested in VOA’s 2017 budget? As the internet has increased access to American news around the world, some are questioning Voice of America’s continued relevance. Bennett defends her organization by calling it a means of “exporting the first amendment” and taking American values to other parts of the world.

Others are less persuaded. James Glassman, former undersecretary of State for Public Diplomacy, called the idea that Voice of America was anything but a part of the foreign policy apparatus “ridiculous.”

“You don’t stop North Korea from getting a nuclear weapon through messaging,” he said. He considers supporting State Department positions one of the primary purposes of Voice of America broadcasts.

The answer cuts to a tension at the heart of Voice of America’s mission. Voice of America began as a part of the State Department and its status as a government news agency is difficult to balance with its journalistic aims. Bennett and Cowan, the present and past directors, took starkly different interpretations of the goal behind Voice of America broadcasts. Was it enough to say, as Bennett does, that “great journalism is great diplomacy,” or should Voice of America be promoting American government policy in its articles?

It’s a question that has become more serious as Voice of America increasingly sees itself being compared and serving as a counter to media services funded by foreign governments, such as the Russian site RT.

“The explosion of information flows during the 21st century has given rise to sophisticated exploitation of media by authoritarian regimes and non-state entities,” wrote the Broadcasting Board of Governors, which oversees Voice of America, in its 2017 budget request to Congress. “While free media are crucial to democratic transitions, civil society and governance, they are also susceptible to abuse by powerful, non-democratic actors including Russia, ISIL and China.”

Still, since the fall of the Soviet Union, it has been difficult for Voice of America to point to a success story where its programming significantly influenced a foreign pro-democracy movement. Instead there have been only a few hints of its broader reach. A media survey by the BBC in 2015 found that 61 percent of Afghan men (women were not surveyed) had listened to Voice of America broadcasts in the last year. That percentage was still far lower than the name recognition for the BBC, however.

Few statistics exist about the success rate of Voice of America broadcasts. In the future, this could put its budget on the chopping block. Yet, for the time being, it will remain what it has been for nearly a century, a glimpse into the United States for people around the world, from North Korea to Nicaragua.

Correction: This piece was updated to reflect that VOA is no longer part of the State Department.