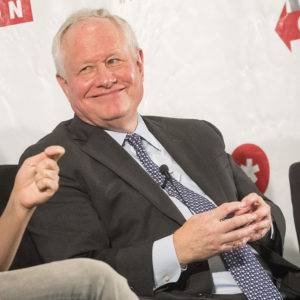 Weather Postpones Kristol NH Visit. Will He Head to Iowa Instead?

Late Monday afternoon, the hosts of the “Politics and Eggs” event in New Hampshire sent out a note announcing that Wednesday’s provocative visit by commentator and prominent #NeverTrumper Bill Kristol had been postponed due to weather:

The storm, which is due to arrive tonight and last into Wednesday morning, has resulted in a decision to POSTPONE our Politics and Eggs Breakfast with Bill Kristol, scheduled for Wednesday morning.

Given that the approaching storm shut down Boston-area airports and Amtrak, this decision isn’t unexpected. Kristol’s response, however, was.

When contacted for a comment about the postponement, Kristol’s office issued this statement:

“Mr. Kristol is on the road in Iowa and couldn’t be reached for comment.”

Kristol has made no secret of his hope that President Trump will face a challenge from his own party.  Could Kristol be that challenger—a la Pat Buchanan vs. George H. W. Bush in 1992?

“When Pat Buchanan was first thinking about running, I’m sure people in the Bush White House were probably saying, ‘Yeah right—some analyst is going to take us on. Who cares?’” says Neil Levesque of the New Hampshire Institute of Politics, one of the organizations hosting “Politics and Eggs.”

“We all know how that turned out. Incumbent presidents don’t need these sorts of distractions,” Levesque added.

Is Bill Kristol in Iowa and New Hampshire hoping to create a “distraction” in 2020?