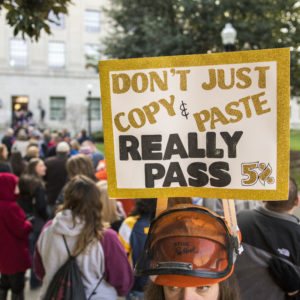 Vanessa Brown, a principal from Clendenin W.Va., holds a sign with her hat as she waits to get into a teacher rally Monday, March 5, 2018, at the West Virginia Capitol in Charleston, W.Va. Hundreds of teachers from 55 counties are on strike for pay raises and better health benefits. (AP Photo/Tyler Evert)
News

West Virginia students returned to their classrooms today after a 9-day statewide strike ended after state lawmakers agreed to a 5 percent raise for teachers.

Legislation approving the raise extended the pay increase to school service personnel and state troopers. It was signed yesterday evening by Gov. Jim Justice who had tweeted earlier in the day that a deal had been reached.

“We have reached a deal. I stood rock solid on the 5% Teacher pay raise and delivered. Not only this, but my staff and I made additional cuts which will give all State employees 5% as well. All the focus should have always been on fairness and getting the kids back in school,” Justice stated through his Twitter account.

Many of the state’s 55 school districts had been posting closure notices on their websites since teachers walked out en masse on Feb. 22. Some had updated their sites last night to let parents know that students are expected to resume classes today.

Questions remain, however, as to how students will make up the lost days.

“We want our students to make up the instructional time but there needs to be flexibility,” said Briana Warner, spokeswoman for Kanawha County Schools. “We understand what parents have gone through, and we are looking at all of our options.”

Options include holding classes over Spring Break or extending the end of the school year until June. But Warner said either of those could interfere with long-standing plans such as Spring Break mission trips. Sports teams use the break to travel to warmer climates for games, and teams could be at risk of losing deposits if students must attend class.

Warner said Kanawha County school officials could decide by Friday how to make up the lost time.

Each county sets its own calendar, but the state Department of Education offers guidance. State law requires schools to have 180 instructional days with flexibility built in for inclement weather and other necessary closures. In remarks yesterday, Justice said that schools should be able to use flexibility to determine how to make up the nine days lost to the strike. That was echoed in a statement from the Superintendent of Schools, Dr. Steven Paine.

“We are committed to providing timely technical assistance to each individual county to innovatively restructure their calendars and to find additional flexibility within their local attendance policies to better accommodate the needs of families,” Paine said.

West Virginia PTA President Kathy Parker said nearly every parent she has spoken with since the strike began supported teachers taking a hard line. According to the National Education Association, West Virginia’s teachers are the 48th lowest paid in the country with teachers averaging $45,622 per year. The national average teacher salary is $58,353.

Over the course of the strike, parents and guardians had to manage child care and other disruptions due to students being out of school.

“It put some parents out, but for what teachers were fighting for, the students can make up the time,” Parker said. She added that the 5 percent raise shows that the state values educators.

The more than 20,000 teachers walked off the job on Feb. 22 after Justice signed legislation giving them a 2 percent pay raise this year to be followed by 1 percent hikes for each of the next two years. Prior to that, the state’s teachers had not received a raise for four years.

A deal was initially reached last week between the governor and state lawmakers on a 5 percent increase, but the state senate balked on Sunday. Eventually, lawmakers in both chambers passed the 5 percent increase that raises wages for teachers, state troopers, and school service personnel. That required about $20 million in cuts to general services and Medicaid.