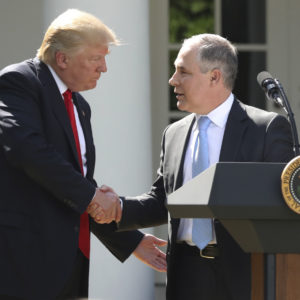 President Donald Trump shakes hands with EPA Administrator Scott Pruitt after speaking about the US role in the Paris climate change accord, Thursday, June 1, 2017, in the Rose Garden of the White House in Washington. (AP Photo/Andrew Harnik)
News

What Does the EPA’s Cooperative Federalism Mean for States?

Cooperative federalism. In formal speeches and addresses to smaller groups, Environmental Protection Agency head Scott Pruitt has emphasized the role states need to play in his leaner, reinvigorated EPA. What this looks like from the perspective of state governments, which are dealing with their own budgetary constraints, is hard to fit into a short speech. As Pruitt continues his attempt to make the EPA simultaneously more effective and more industry-friendly, state governments are being asked to take on more responsibilities, often with flat budgets. Working out what cooperative federalism looks like in practice has been the subject of a series of meetings, white papers, and training seminars hosted by the Environmental Council of the States (ECOS), which includes representatives from all state and territorial environmental agencies.

“This approach requires a recasting of the state and federal roles and our relationship,” said Martha Rudolph, a past president of ECOS and director of environmental programs in Colorado. “We need an environmental protection program worthy of our 21st century environment, and I have high hopes of positive change and equal or greater public health protections and environmental outcomes.”

The hope is that cooperative federalism will allow the EPA to build on the work state environmental agencies are already performing. Already states are the final implementors of about 96 percent of environmental policies. The EPA has frequently taken more of an oversight role, in which it establishes policies that are then enforced by the states. Pruitt hopes to expand upon this pattern, shifting additional responsibilities onto the states in order to minimize the role of the EPA. So far, ECOS is rising to the challenge.

“The American public expects these services, but is not interested in which body provides the services,” explains Alex Dunn, the executive director and general counsel of ECOS.

This new understanding of the relationship between federal, state, an even tribal authority, reflects the reality that states themselves have environmental policies of their own which often mirror federal goals. In June, ECOS developed a document laying out the roles and functions of a “cooperative federalism 2.0” as well as a list of specific issues where this approach could be applied.

The document stressed that while the EPA  should “continue to lead in setting and adopting national minimum standards to protect public health and the environment,” states would be “key partners” in implementing these standards.

“States have the firsthand knowledge of how to achieve successful implementation, including how to work with involved parties and the public,” says Todd Parfitt, director of the Wyoming Department of Environmental Quality and current ECOS president. “EPA oversight should emphasize developing and aligning policies rather than repeatedly auditing state level efforts.”

This in itself is a shift from the approach of the Obama-era EPA which took a sometimes heavy-handed approach towards auditing state policies. Under Pruitt, the EPA hopes to see better state compliance and outcomes in a system that relies less on audits and punitive actions.

“The EPA should respect the states’ role and not review states implementation on a routine basis unless there is some need to do so,” Parfitt continued, describing the EPA’s role as that of “a convener and facilitator,” particularly of multi-state actions.

To help enact these policy goals, ECOS has laid out eight areas where it believes cooperative federalism will change how it does business. These include a lighter EPA hand on oversight, streamlining of permitting and enforcement processes at a state level, and working with other agencies on infrastructure projects.

Though the various parties are committed to working towards this new partnership approach to environmental regulation, its implementation hasn’t been without hiccups. Over the summer, Pruitt drove around the country in a motorhome as part of a a “listening tour” with state governments. In early August, he visited North Dakota, where he met with Gov. Doug Burgum (R), Rep. Kevin Cramer (R), and Sen. John Hoeven (R). All of the meetings occurred behind closed doors. Reporters were not allowed to attend the meeting and their questions were restricted to a 15 minute period afterward.

This ran against the transparency policies advocated by Burgum and perhaps even North Dakota law. One of the meetings included two of the three members of the state’s Industrial Commission, constituting a quorum. According to state law, any meeting of the commission is obligated to be open to the press.

State-level observers believe that the request for no press came from Pruitt’s office. What that means under state law remains to be determined.

Federalism is an often uneasy balance of competing needs and desires. Bringing the catchphrase out of speeches and into practice will doubtless require many more meetings.