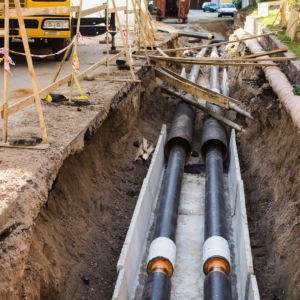 What Does Trump’s Infrastructure Plan Mean for America’s Water Works?

Infrastructure is a broad term. It covers not only roads and bridges, but also America’s water pipes, sewers and telecommunications systems. The infrastructure plan that President Donald Trump presented to Congress on Monday pitches itself as the “most comprehensive infrastructure bill” in the nation’s history. The new infrastructure proposal takes major steps towards reducing the federal regulatory burden that had hampered past projects and includes numerous incentives to encourage state and local investment in a variety of projects. However, it is still unclear if the infrastructure plan will be enough to tackle America’s aging water and sewer systems.

Roughly 1.2 million miles of water pipes supply the U.S. with drinking water. Across the country, many of these pipes were installed nearly a century ago, with an expected lifespan of 75 to 100 years. Some cities–like Philadelphia–are relying on even older systems. (Philadelphia’s waterworks were installed before the Civil War.) These systems are approaching the end of their projected lifespans even as cities grow in size, which adds additional strain. To meet these challenges, the American Water Works Association estimates that $1 trillion will need to be spent on water alone to meet the infrastructure demands of the next 25 years.

The plan Trump presented has been billed as a $1.5 trillion infrastructure plan. However, because of the details of the funding structure, it is more precisely a $200 billion federal infrastructure bill, with more than $1 trillion of additional funds coming from state and local governments. As far as federal expenditures, this is relatively minor, particularly as the increases are spread across a period of several years.

The federal grants are intended to spur investment from other sources, though, to address all too real gaps in infrastructure spending.

“Every Federal dollar should be leveraged by partnering with State and local governments and, where appropriate, tapping into private sector investment — to permanently fix the infrastructure deficit. Any bill must also streamline the permitting and approval process — getting it down to no more than two years, and perhaps even one,” Trump said in his speech when the plan was announced.

Unfortunately for homeowners and renters, the most likely source of this money is ratepayers. Although monthly water bills vary widely between municipalities, the bulk of the funding for water infrastructure comes from customers.

In fact, some of the most significant changes in the bill come from shifts in regulatory authority, rather than an influx of ready cash. Trump’s infrastructure plan continues the oversight reform efforts EPA Administrator Scott Pruitt and Energy Secretary Rick Perry have started in their agencies, establishing a firm 21 month deadline for environmental reviews and clarifying the role of the “lead agency” for the overall approval process. The end goal of the document is to ensure that projects need only complete a single environmental review and a single record of decision.

Requiring several agencies to use the same decision document would expedite the approval process by eliminating unnecessary steps.

Because of the structure of the regulatory bodies, federal oversight of municipal water facilities can be burdensome for small communities. At the federal level, the EPA oversees wastewater treatment. Meanwhile, the Department of Health sets standards for drinking water. In many municipalities, these functions are combined in the same facility. After all, while we might not want to consider it in these terms, an effective waste water treatment facility would produce water clean enough to enter into the drinking water treatment system. Battling regulations from the EPA and Department of Health have increased costs for these sorts of facilities

The full impact and even some of the details of Trump’s plan have yet to be determined, however. Because of the disparate nature of many water and sewer systems, it is more difficult for the federal government to directly support new construction than it is for roads or bridges. In addition, the new tax plan passed by Congress has had significant impacts on how municipalities and utilities are able to finance new projects.

In the meantime, Trump’s plan may be slower to change the world of water than some had hoped for.