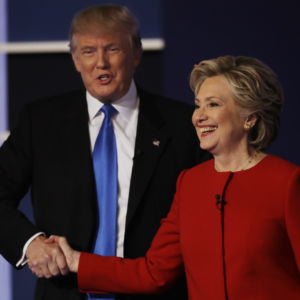 What Employers Want the Next President to Prioritize First

Employers have a lot on the line this election and hope the next president will prioritize a few critical issues that have impacted their businesses.

The economy has changed in profound ways in recent years. Employers have faced a rapid increase in new regulations while the economy has remained sluggish since the last recession. Industry groups note that their membership would like to see reforms in several key areas, including taxes and regulations.

“Throughout the presidential election, our small business members have been deeply concerned about issues that are directly affecting their businesses and the economy,” Small Business & Entrepreneurship Council President Karen Kerrigan told InsideSources. “These range from overregulation, the rising cost of health care, tax complexity, the lack of new business creation and capital, and general weakness in the U.S. economy.”

Democratic nominee Hillary Clinton believes the political system needs to do more to help small businesses while making sure the rich are paying their fair share in taxes. Republican nominee Donald Trump has argued for decreased government intervention but has still advocated for punishing businesses that outsource jobs with increased taxes.

The election has elevated concerns among industry groups and the employers they represent.

“One of the things that has been frustrating watching this political campaign is these are candidates that are largely running issue-free campaigns,” David French, vice president of government affairs for the National Retail Federation, told InsideSources. “I think this will be an unusual transition and unusual honeymoon period because I’m not exactly sure what the candidates will bring to Washington in terms of ideas.”

Emotional pleas and personal attacks have seemed to define this election far more than policy. Kerrigan says she has seen little in the way of actual details when it comes to the issues important to employers.

“The debates offered minimal insight into these issues,” Kerrigan said. “But there’s still time left in the remaining days of the campaigns for the two presidential candidates to focus on and outline plans to spur growth for small businesses and relieve them of burdensome government costs.”

A new president could very well mean an entirely new path forward for the country and its employers. French notes his members are hopeful despite how the election has gone.

“I think our members are hopeful that there could be a number of things accomplished in the next Congress and the next administration,” French said. “The first couple of years of a new administration are when almost all of the legislating happens.”

President Barack Obama and his administration have done a lot to change workplace rules and regulations. There have been regulatory changes that have impacted overtime compensation, contracting, union elections and the franchise model. Critics warn the changes have put an unnecessary burden on employers.

“There are a lot of regulations that have been driving retailers crazy in recent years,” French said. “I can point to the overtime rule and the implementation of that which has been really challenging for some retailers. A strange new world has come out of the National Labor Relations Board and the Department of Labor.”

The next president could do a lot by reining in the new regulations or by piling more on. The president, for instance, has the ability to nominate members to the National Labor Relations Board (NLRB) with Senate approval. The NLRB oversees workplace disputes, and its decisions often dictate how laws get interpreted. The president could also slow down the flow of proposed rules coming from the Department of Labor (DOL).

“Our biggest concern is that we’ll have four more years of what we currently have with the onslaught of regulations,” said Kristen Swearingen of the Associated Builders and Contractors. “The words DOL and NLRB were not nearly as frequently used as they are now. They’re part of our everyday jargon and our members are terrified of both those agencies.”

Taxes are another important concern that employers hope the next president will tackle straightaway. Lawmakers on both sides of the aisle have discussed tax reform but rarely has anything been done in a fundamental way. Industry groups argue it’s about time the tax system undergoes major reform.

“A thing that is on the table is obviously tax reform,” French said. “The economy is in dire need of a tax overhaul. We think the U.S. tax code has become uncompetitive, and rather than attach its uncompetitive nature with regulations, we think Congress and the White House should take a comprehensive look at reforming the tax code.”

French points to a proposed tax plan from 2014 as a possible way to address some of the problems. Republican Rep. Dave Camp introduced the legislation as a means to simplify the tax code. He argued at the time that lowering the business tax rate while simplifying it will attract new investment into the economy.

Tax reform requires significant political capital to accomplish. Swearingen notes its something the next president should prioritize but doesn’t expect anything big right away.

“I can’t imagine tax reform would be that easy out of the gate but it’s a huge issue,” Swearingen said. “We’ve been talking about tax reform around here for years and years.”

The national infrastructure is vitally important to employers across the country. Safe and reliable highways and roadways are essential for businesses to get their products to consumers and stores. Nevertheless, there have been concerns infrastructure is in critical need of upgrades.

“Both candidates have really seemingly gone out of their way to talk about how important it is to invest in infrastructure, and that is something we strongly believe in and strongly agree with,” Aric Newhouse, government relations vice president for the National Association of Manufacturers, told InsideSources.

Manufacturers have a particular interest in the national infrastructure for two big reasons. They provide the materials, like concrete and steel, that go into making roads and bridges. They also use those roads and bridges to deliver their products, just as other industries do.

“More infrastructure investment is inherently good for manufacturers,” Newhouse said. “The other part of that is, if you’re a manufacturer who has nothing to do with the infrastructure space, you still care because you have to get your goods and products to market in a timely and competitive way.”

Newhouse adds that he hopes the next president comes in with a bipartisan plan to improve the national infrastructure. He notes the proposal should provide a long-term solution to fundamentally address the infrastructure needs the country faces.

Energy policy has remained a constant priority for business groups much in the same way taxes are. Lawmakers are often slow to do much but as time passes the need for fundamental reform increases. Newhouse notes its been almost a decade since lawmakers have really tackled energy is a comprehensive way.

“We have basically become dormant in looking at energy policy in a comprehensive way since 2007,” Newhouse said. “The ability we have to bring energy resources to market, the development of natural gas, of fracking, the technology that has been brought to bear, we’re in a fundamentally different place on energy resources in this country.”

There are many laws that serve to benefit labor unions. Project Labor Agreements (PLAs) have been a huge point of contention among nonunion companies that compete with unionized businesses for public projects. Swearingen argues the next president should consider strapping the union-favored policy.

“We fight very hard against Project Labor Agreements here,” Swearingen said. “It’s our number one legislative and regulatory priority here. If the stars aligned and we had an administration and a Congress, it would primarily help to preserve public competition on public construction projects right out of the gate.”

PLAs are a type of labor agreement that governs employment standards for public projects. They can be for a single project or be the law for a particular region. Critics argue they unfairly benefit unionized companies against nonunion competitors who are otherwise able to operate at lower costs.

The agreements are primarily used for public construction projects. The Associated Builders and Contractors has found through research that PLAs, in general, tend to drive up costs for public projects and thus puts a burden on taxpayers.