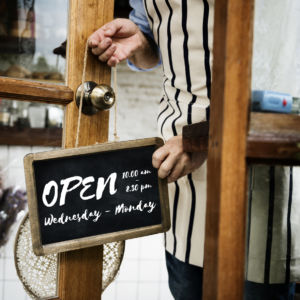 InsideSources reached out to small business owners from across the country to get their thoughts on the Republican plan to overhaul the tax code.

Republicans have promised to lower individual and business tax rates in the hope of spurring economic growth. They have made small businesses a central focus of that effort since the beginning. Senate leaders even held an event Tuesday focused on how their bill will help small businesses. But small business owners themselves have varying views on how they believe the plan would actually impact them.

Senate Republicans could pass their version of the legislation as early as Thursday. They have been able to advance the bill fairly quickly since introducing it Nov. 9. House Republicans were able to pass their version of the bill Nov. 16 – despite some opposition among party members. Both bills have a few key differences that will have to be resolved before they can be signed into law.

Guy Berkebile is the founder and president of Guy Chemical Company in Pennsylvania. He founded his company in 1995 and now has roughly 140 employees – but the journey to becoming a successful small business started with a lot of personal sacrifices, including taking bank loans and not drawing a salary for the first few years. But even now he can’t invest as much as he’d like into his business because of high taxes. He notes the plan to reform the tax code would have a huge impact on helping his company.

“It would make a huge difference,” Berkebile told InsideSources. “Under the pass-through entity plan, it’s going to save us about 15 percent on our federal tax rate. That 15 percent is going make a huge difference in my ability to reinvest back into my business. I hear a lot, I know Hillary [Clinton] has talked about business owners, corporate executives, lining their pockets with the profits they make on their business, and I’m a prime example of someone who has constantly put the profits of their business back into the company to grow.”

Berkebile adds that he is taxed at 39.6 percent for the federal rate alone – with his total tax burden approaching close to 50 percent for every dollar his company makes after state and local taxes. He notes that the tax burden has been a huge drag as he has worked to invest millions of dollars back into his business to expand its facility and buy new equipment.

The House and Senate versions are generally similar with their aim to lower rates and simplify the tax code. Both bills reduce the top rate for C corporations from the current 35 percent down to 20 percent. C corporations are often larger and structured so the tax rate is applied to the company itself as opposed to the owners.

Both bills also hope to help small businesses by reducing the tax burden pass-through companies face. These businesses include sole proprietorships, partnerships, and S corporations – and are often, but not always, small and family owned. The owners and investors of these businesses are directly taxed on their income, rather than having the corporate rate applied to their business.

The Senate’s version includes a 17.4 percent deduction on pass-through income while the House reduces the top rate down to 25 percent. That means the larger corporations generally will get a lower rate compared to those smaller businesses, which has prompted concern among some small business owners. Berkebile adds that would be one thing he would change despite his overall approval of the bill.

“It would be to treat S Corps the same as C Corps,” Berkebile said. “I’m still scratching my head over why an S Corp. has to pay a higher corporate rate than a C Corp., are we less important to the economy. The answer is no, we’re not less important, so why treat us differently and tax us five percent higher than a C Corp.”

A major reason behind C Corps. getting a lower tax rate is that they often face a double tax. The Tax Policy Center explains corporate income is generally taxed a second time when it is distributed as investor dividends that are liable to the individual income tax – but some corporate shareholders are exempt from the income tax.

Kalena Bruce is the owner of a Missouri ranch which has been in her family for five generations. She is also a certified public accountant with Integrity Tax and Accounting. Bruce expressed concern over the Senate version of the legislation which eliminates or reduces some deductions that might actually help small businesses.

“It feels like a real rush job on their side,” Bruce told InsideSources. “We don’t really know how some of it’s going to impact small businesses, and that makes us nervous. We did that with the Affordable Care Act–let’s just pass it and we’ll work it out on the backside. There’s just some stuff in there that’s really concerning for small businesses.”

Bruce is much more supportive of the House version of the bill which she sees as better addressing the needs of small businesses. She is particularly excited about an amendment introduced by House Ways and Means Committee Chairman Kevin Brady. The Brady Amendment, as it is now known, made several substantial changes to the bill like preserving the exemption for childcare services and including a 20 percent charge for multinational corporations that shift gains to a foreign subsidiary.

Bruce adds even the House version of the bill isn’t perfect. She would change how the bill handles S Corps – particularly in regards to a 70/30 split on passive income. The split is designed to distinguish between labor income that would be taxed at a regular rate and capital income. For individuals that are deemed to have both labor and capital income, the split is used to separate those gains.

Bruce sees the split as problematic and would prefer it is not included, like in the current tax code. She also wants the Section 179 deduction to become permanent – which allows business owners to fully deduct certain purchases like new equipment. The House bill sets those deductions to expire after five years when it can be reconsidered. Bruce notes that if the final bill looks more like the House version and includes those changes, it would be a huge boom for her business.

“For me, that’s going to help me increase my bottom line so I can give my employees raises which I think is the whole point of this bill,” Bruce said. “Right now we spend a lot of money on trying to be tax-efficient and trying to adhere to some of the crazy tax laws that are out there. So if we simplify and actually lower the small business effective tax rate, then we’ll be able to expand our businesses whether that be giving our employees raises or creating more jobs.”

Bruce and Berkebile are both members of a business advocacy nonprofit known as the Job Creators Network. The group helps small business owners connect with lawmakers and the media so they can hear from them firsthand instead of through lobbyists and special interests. But they’re not the only small business owners who have strong opinions about the plan to reform the tax code.

Businesses for Responsible Tax Reform, a liberal advocacy group opposed to the tax bills, released a poll Nov. 27 which asked 794 small business owners nationwide what they think of the plan. The survey found that only 34 percent of small business owners support the bills, while 51 percent oppose them, primarily due to larger corporations getting a lower tax rate.

Small business owners aren’t satisfied with the tax system as it currently stands right now either. The Job Creators Network found in a survey August 10 that most small business owners would be able to reinvest more back into their business if their rates were cut by 15 percent. Those saving would primarily go towards wage hikes, new hiring, and expanding.

Randy Stevenson is the president of the Wisconsin based industrial chemical cleaner manufacturer DeVere Company. He believes the plan to reform the tax code would be a major improvement over the current system – but also believes more can be done. Stevenson also expressed some reservation over S Corp. businesses being taxed more than C Corps.

“It’s certainly a step in the right direction, I don’t think it really goes far enough, and we’ll love to see some spending cuts to go along with it so that it can be more permanent,” Stevenson told InsideSources. “Taxes are our third largest cost, the first being raw materials, and then labor. So, if we get a cut in that, we can definitely grow more and invest more.”

Republicans have entertained the idea of spending cuts to make up the difference, but with so much of the federal budget going towards social and health services, that would likely lead to a difficult legislative battle in of itself. They also hope the increased economic growth could bridge some of that gap. Economists and tax policy experts have come to varying conclusions on how much the tax bills will help economic growth.

“My biggest concern as a small business owner is, I wish I were as optimistic as some of the Republican forecasts on what this will do to the economy,” Josh Dare, the co-founder of The Hodges Partnership, told InsideSources. “I’m not convinced that it’s going to have the rosy effect on the economy that some of the predictions have. I’m concerned about its longer-term impact on the debt.”

The Hodges Partnership is a strategic communications company based in Virginia which specializes in public relations and social media. Dare adds that its disappointing Republicans are risking deficit increases when so many of them ran on responsible fiscal policy. He also notes they have not done a good job of actually explaining how their tax reform plan will impact small businesses beyond the talking points.

“So much of what I’ve seen reported about the tax bill, I don’t see a lot addressing the impact on small businesses,” Dare, who shared his own personal perspective as a small business owner, said. “I hear a lot about making the tax cut permanent for big corporations, for wealthy individuals, and it sounds like a negative impact on some poorer individuals. So I want to give you some insights here but I don’t really sure what that is.”

“My understanding is that most of the tax cuts are for big business. Small business people are still going to be around that 25 percent or so range,” Older told InsideSources. “The really large companies are either inverting to other countries or who are finding loopholes are going to get a 15 percent tax cut, and the rest of us, small businesses, are not.”

Republicans still have several major hurdles ahead of them before they can pass their tax reform plan into law. Once the Senate passes its version of the legislation, both chambers will then have to form a conference committee together in order to resolve disagreements on the legislation. Once the House and Senate pass identical bills, the final language can then go onto President Donald Trump to be signed into law.