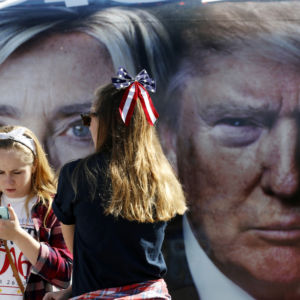 What Unions Want to See the Next President Prioritize First

Labor unions have played a critical advocacy role in the 2016 election, and they’re readying to lobby the next president on key policies right out of the gate.

A major focus for labor in the next administration will continue to be workplace laws and regulations. Unions have successfully fought for changes that impact nearly every workplace in the country. President Barack Obama and his administration have helped bring about many of the policy reforms in recent years that unions have had on their agendas.

Nevertheless, unions are still fighting for several key policies that have yet to be achieved. The next president could determine where labor regulations and the economy go from here. Labor unions hope the next president will focus on the minimum wage, healthcare, immigration and trade, among other important policies.

Democratic nominee Hillary Clinton has been much more willing to cater her platform to what unions want, perhaps in an effort to prevent labor from supporting primary rival Sen. Bernie Sanders. Republican nominee Donald Trump has argued for decreased government intervention in how businesses operate except when it comes to keeping jobs in the country.

In the general election, few unions have backed Trump, with most supporting the Democratic nominee, as they traditionally have. The election Tuesday will have a significant impact on labor policy in the years ahead.

Fighting For a $15 Minimum Wage

Labor unions have been a driving force behind the movement to increase the minimum wage to $15 an hour. The Fight for $15 movement has been primarily backed by labor groups like the Service Employees International Union (SEIU). The movement has seen victories on the local level but has not yet been able to increase the national minimum wage which has sat at $7.25 an hour since 2009.

“I’m very proud of the Fight for $15,” Unite Here Vice President María Elena Durazo told InsideSources. “I think it shows that people across this country see that as a very crucial issue. To have an impact on the economy the way that we should, to circulate money in our economy, the best way is for workers to get higher wages.”

Labor unions and other advocates have argued an increased minimum wage can help to address poverty. Low-wage workers would be able to afford more which could benefit the general economy. Those opposed, however, warn it will decrease employment opportunities because of the increased cost of labor.

Getting People Back to Work

The economy lost over 8 million jobs during the recession almost a decade ago, and many workers still find themselves in jobs below their experience level. The AFL-CIO argues policies should be put in place to get people jobs with decent wages. The union says the government should promote better job opportunities by investing more into education, increasing the minimum wage, and by making unions stronger.

The unemployment rate has declined markedly to 4.9 percent, but job market indicators elsewhere have not been as good. The labor force participation rate, which tracks those employed or actively seeking work, has failed to reach the level it was before the recession. The employment rate, in contrast, doesn’t track those who have suffered long-term joblessness.

President Barack Obama made healthcare a cornerstone of his administration with the Affordable Care Act. Labor unions were slow to embrace his healthcare overhaul but did eventually become some of its strongest advocates. Nevertheless, unions still believe there is more that must be done to improve healthcare.

“We want affordable healthcare, we want affordable medicine,” Durazo said. “That is a very top priority, I would say, not just for our union, because of the demographics in our industry, but I think it’s a priority overall for everyone is the labor movement.”

The Affordable Care Act requires that Americans purchase health insurance, with the goal of spreading the risk among both the healthy and sick. In so doing, private insurance companies cannot discriminate against people with preexisting conditions, and they must follow a wide array of other regulations.

The law has forced more people to get covered by health insurance, with many receiving tax subsidies to help pay for insurance. Nevertheless, the cost of health insurance has increased drastically since the law was first enacted. Labor unions hope the next president will focus on making sure healthcare cost are more affordable.

Labor unions are primarily responsible for negotiating with employers on behalf of workers. Collective bargaining has been their main tool to effectively do just that. It allows unions to negotiate contracts on behalf of all employees within a workplace based solely on a majority vote.

“The right of workers to collectively negotiate decent wages and working conditions, I think has to be a part of our future administration,” Durazo said.

Durazo adds the current president has done a lot to improve collective bargaining by making it easier for workers to vote in a union. She points to a new rule which shortens the length of time in which a labor union certification election is held from a median of 38 days to as little as 11 days. She hopes the next president will continue those reforms so that it’s easier to join a union and harder for employers to ignore them.

Labor unions have been strong advocates for immigration reform. They have pushed for a system that makes it easier for immigrants to legally enter the country. Durazo states the next president must tackle immigration in a fundamental way.

“I would say immigration is a top priority across the labor movement,” Durazo said. “I mean rigorous immigration reform, not a little bit around the edges but deep reform, and we’re on the same page with employers, with business. It’s probably the most diverse united front of any national issue that I know of.”

Those like the AFL-CIO have argued that all workers can benefit from a system that allows for easier immigration that includes a pathway to citizenship. The union notes that some employers have been able to take advantage of illegal immigrants because they are not protected under the law.

Trump has been most at odds with the labor movement on immigration. He has called for deporting illegal immigrants, building a wall on the border with Mexico, and blocking immigrants coming from countries known for Islamic extremism.

The Trans-Pacific Partnership (TPP) has faced adament opposition from unions who claim it would be harmful to workers. It’s also one of the few policies on which the labor movement agrees with Trump. Clinton was originally in support of the trade deal but walked back that position during the Democratic primary.

President Barack Obama found himself at odds with many within his own party for negotiating the deal. It’s designed to open up trade among partner countries. Labor unions have contested that the trade deal is nothing more than a giveaway to corporations at the expense of working families.

The White House has argued the trade deal will actually help workers despite what unions claim. It will cover a few countries known for notorious labor violations. Communist Vietnam, Malaysia and Brunei are among the partner countries cited for labor and human rights violations.

The SEIU and other unions, along with Trump, have compared the deal to the North American Free Trade Agreement (NAFTA). They claim NAFTA resulted in many American jobs being lost. The president has previously insisted TPP could help fix many of the problems NAFTA caused.