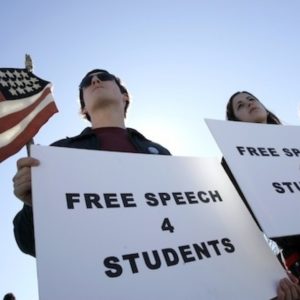 When Students Are Confused About Freedom of Expression, Flip the Script

Posted to Education February 14, 2019 by Emily Chamlee-Wright and Sarah Skwire

The Foundation for Individual Rights in Education recently released the results of its survey about free speech on campus. The results are mixed in some troubling ways. In general, the survey found that “when students are asked more specific questions about the limits of free speech or the content of speech, their support for the protection of speech declines.”

Students seem to have only a “surface level” understanding of the First Amendment and its protections, and they display an “unwillingness to see them applied.”

For example, although a heartening 96 percent of students think that it is important that their civil rights be protected, and the largest proportion of the surveyed students thinks that free speech is the most important of those civil rights, as the survey digs a little deeper the picture becomes more confused. Seventy-five percent of the surveyed students felt that college students should have the right to free speech on campus, even if it is offensive. But 57 percent of that same group of surveyed students also felt that the university should be able to restrict student expression of political views if those views are offensive. And 70 percent thought that students with offensive views should be excluded from extra-curriculars.

Zooming in on the details of the survey, it is unclear what the students mean when they say they support free speech. So how can educators help students to clarify their stance and think deeply and clearly about the complexities of free speech on campus?

One obvious answer is a change in curricula that would focus on the First Amendment earlier and more often. Such change will require educational reforms in public education. If they happen at all, those reforms will progress slowly. Their effects will be slower still. What can we do now, when speech issues are so central on so many campuses? How can educators help today’s students — not just the children of today’s students?

As an immediate step, educators might try “flipping the script” for students, to help them imagine the unintended consequences of more restrictive speech environments on campus. If a set of posters, a campus speaker, or a work of art is so offensive to students that they feel it should not be allowed on campus, we can encourage students to flip the script and imagine what it might be like if the story were different — if something they believe or support were being barred from expression.

By flipping the script this way, we can all do a gut check on our own reactions and decisions, in hopes of avoiding the temptation to call for “free speech, except when it upsets me.”

There are a host of great literary models that could encourage this kind of imaginative study — from Orwell’s discussion of Newspeak to Mark Dunn’s novel “Ella Minnow Pea.” History provides examples such as Henry VIII’s Treasons Act (which made it a capital crime to merely imagine the king’s death) and the American Alien and Sedition Acts of 1798 (which, among other restrictions, prohibited public opposition to the government). Theology and science departments have the trial of Galileo and the Scopes Trial to draw upon.

When students say that the university is justified in restricting the expression of views that are offensive, they rarely imagine that their own views might offend. Flipping the script challenges students to question that assumption.

Should the prospect of that offense be grounds for censorship? When viewed from this vantage point students come to respect the default rule of permissibility. If expression is to be restricted, there has to be a compelling case for doing so, and the burden of making the argument falls on those who are calling for the restriction.

Flipping the script can happen across the curriculum and across the political spectrum and doesn’t even need a hot button campus issue for educators to challenge students to try it. In fact, flipping the script early and often lends significant advantage as it gives students — not to mention faculty, administrators and trustees — practice at extending their moral imagination to see how restrictive rules they may favor in one context can come back to haunt them in another.

Flipping the script isn’t a lesson in deep constitutional principles. Nor will it provide students with a complete understanding of the intricacies of First Amendment law and the complicated ways in which it intersects with public and private institutions of higher learning. But it is, at least, a method to encourage students to practice a kind of mindfulness about their fellow students and to learn to engage with them with some amount of understanding. It is a way of opening up conversations on campus rather than shutting them down.

Emily Chamlee-Wright is the president of the Institute for Humane Studies at George Mason University. Sarah Skwire is a senior fellow at Liberty Fund. They wrote this for InsideSources.com.