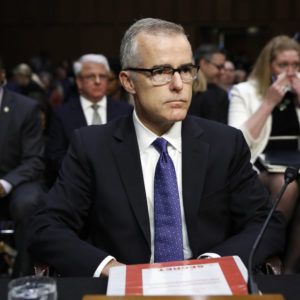 Acting FBI Director Andrew McCabe sits with a folder marked "Secret" in front of him while testifying on Capitol Hill in Washington, Thursday, May 11, 2017, before the Senate Intelligence Committee hearing on major threats facing the U.S. (AP Photo/Jacquelyn Martin)
News

Where the Acting FBI Director Stands on Encryption

Posted to Technology May 11, 2017 by Giuseppe Macri

The new acting director of the FBI Andrew McCabe will inherit more from predecessor James Comey than an investigation into Russian ties to the campaign of President Donald Trump, who fired Comey Tuesday. Depending on how long he runs the agency before a Trump successor is approved — something Senate Democrats upset over Comey’s firing will likely draw out — McCabe may have to take up Comey’s other political battles, including encryption.

Almost since the beginning of his tenure as head of the FBI in 2013, Comey engaged in a crusade against criminals and terrorists evading law enforcement and intelligence surveillance online, or “going dark,” via default encryption platforms like Apple’s iPhone and Android OS.

“We all care about safety and security on the Internet — and I’m a big fan of strong encryption — we all care about public safety, and the problem we have here is those are in tension in a whole lot of our work,” the former FBI director told Congress in 2015. “We work for the American people. We work with the tools that they give us through Congress. And so our job is to say, ‘Hey look, our tools are being eroded, and we’re not making it up.'”

Comey at first sought legislation from Congress mandating companies like Apple build “back doors” into their products through which law enforcement and intelligence agencies could access and decrypt communications. Comey later backed down in favor of a more nuanced and less specific approach, calling on lawmakers, agencies, and companies to sit down and work out a solution.

The debate came to a head last year when the FBI sued Apple to unlock the iPhone of one of the attackers in the December 2015 shooting in San Bernardino, California that left 14 dead. The agency eventually abandoned the case in favor of letting an outside firm crack the phone’s encryption. Congress convened a working group to examine the issue that largely fell between the cracks during the 2016 election season.

Now a rising number of ISIS-inspired terrorist attacks in Europe and growing concerns of cybersecurity and election hacking in the U.S. and abroad are churning up the issue again, with Trump himself taking a stand against Apple during the campaign.

Even if McCabe is replaced, he’s likely to have an influence on the agency’s encryption stance going forward as the deputy under Comey. During an interview with McCabe in October, the then-deputy director appeared to defer more to the American public than his boss at the time when deciding how to strike the right “balance” between privacy and national security.

“It’s a great question and it’s one you probably don’t want me to answer, or [National Security Agency Director] Mike Rogers to answer or the private sector to answer,” McCabe told CNBC. “How do we have a conversation in this country about how do we feel about the cost of privacy versus national security?”

McCabe said there’s “no world of absolute” privacy or security, and that neither side has made progress by “throwing absolute positions at each other.”

During a panel discussion on cybersecurity at the Cambridge Cyber Summit, co-sponsored by CNBC, MIT, and the Aspen Institute, McCabe said of the Apple case it should be an issue Congress decides, not law enforcement.

The then-deputy director echoed one of Comey’s arguments against tech community claims that to create access to any encrypted platforms means compromising the whole system.