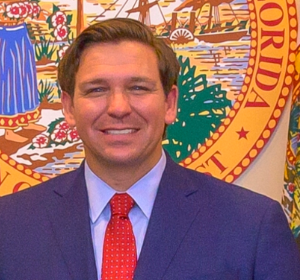 That’s the question some Sunshine State observers are asking as Florida Gov. Ron DeSantis pushes a state-level drug-reimportation bill like the one passed by the Vermont state legislature last year. Intended to lower costs for Florida residents, Grover Norquist of Americans for Tax Reform calls it “a clever ploy designed to trick proponents of limited government and free markets into supporting socialist policies.” That explains why Sanders supports it. But what about DeSantis?

Republican Congressman-turned-Governor DeSantis ran as an unabashed Trump supporter in 2018 and is considered part of the GOP’s conservative wing. But the drug reimportation bill he’s backing closely resembles a plan Bernie Sanders pushed for years as a Socialist member of Congress until he embraced the “Medicare For All”  fully socialized health care policy.

Florida’s HB 19, which DeSantis supports, attempts to lower prescription drug prices by establishing the Canadian Drug Importation Program, allowing Florida to buy drugs— many developed and produced in the U.S. — at savings through the price controls imposed by Canada on drug manufacturers. Vermont passed a similar bill last year, though they have yet to take concrete steps to implement it. Why?

“Because the idea is a great political headline, but in reality it creates a clear and imminent threat to the public’s health and safety,” says George M. Karavetsos, who previously served as director of the FDA’s Office of Criminal Investigations. Karavetsos told InsideSources these laws “attempt to end around the FDA, which is the world’s gold standard for drug safety.” He also says that there are price and distribution challenges that make the DeSantis/Sanders scheme unworkable.

“The idea that Floridians or Vermonters are going to receive prescriptions drugs coming from legit Canada pharmacies is absurd,” Karavetsos says.

He’s not the only one with doubts.  Four former FDA chiefs— Robert Califf and Margaret Hamburg from the Obama years, and Andrew von Eschenbach and Mark McClellan of the George W. Bush administration— signed an open letter to Congress opposing drug importation plans.  They warned that allowing these states to operate outside the FDA’s protection would “likely harm patients and consumers and compromise the carefully constructed system that guards the safety of our nation’s medical products.”

Concerns about the quality and safety of imported drugs are on the rise as the counterfeit pharmaceuticals trade continues to expand. A 2018 study published in the Journal of the American Medical Association reports that globally, “Substandard and falsified medicines are a substantial health and economic problem,” and says the value could be as high as $200 billion. And according to a 2015 report from the National Association of Boards of Pharmacy, 97 percent of online drug sellers were operating in conflict with pharmacy laws and practice standards.

As Scott Gottlieb said in 2016 before becoming President Trump’s FDA chief (he stepped down in March 2019): “Given the rapid growth in the prevalence of sophisticated counterfeit drugs, no politician will approve a drug importation scheme without implementing a reasonable measure of regulatory oversight. There are simply too many channels for fake drugs to enter any importation scheme to forgo some meaningful controls.”

Keeping Florida (or Vermont or Colorado) consumers safe will cost these states significant resources, which is one of the reasons estimates of actual savings to customers from drug importation are one to two percent. Another reason the Sanders approach has yet to be implemented is basic economics.

“Why would Canada’s socialized healthcare system become America’s wholesaler to sell drugs at cost to Florida?” asks Ryan Ellis of the Center for a Free Economy, who points out to InsideSources that Canada’s 37 million population is a relatively small market. Having large states like Florida (21 million) entering the supply chain could result in higher prices and lower supplies for Canadians themselves.

“It’s Economics 101,” Ellis says. “If you put in a price control, price controls lead to scarcity and scarcity leads to rationing.”  And with Floridians willing to pay higher prices that Canada is charging under its price-control scheme, the market pressure would send their local drug supply south. Steve Morgan, a Canadian health economist, made a similar point to Politico:  “The Canadian shelves would run dry.”

“The United States has the safest regulatory system in the world. The last thing we need is open borders for unsafe drugs in search of savings that cannot be safely achieved,” Azar said. “You can’t improve competition and choice in our drug markets with gimmicks like these — you have to boost competition and price transparency.”

Competition and price transparency are traditionally conservative, free-market ideas.  Abandoning them for government-imposed price controls makes sense for a Socialist like Bernie Sanders. But what about conservative Republicans like Gov. DeSantis and President Trump?