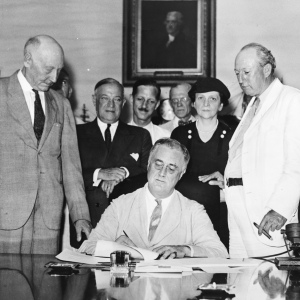 The New Deal has been the foundation of national workplace law for almost a century, but now some argue it’s hurting the very workers it was meant to help.

The Competitive Enterprise Institute released a detailed report Thursday listing policies it hopes the next Congress will tackle. The report lists financial policies, regulations, the environment, and technology as a few key areas that need to be addressed. It also argues labor and workplace laws are in critical need of reform.

“Obsolete New Deal–era labor laws and regulations are becoming a drag on the economy,” the report states. “The old adversarial master–servant model of labor relations has little to offer the 21st-century workforce, which is characterized by horizontal corporate structures, significant job mobility, and instant, constant communications.”

The economy has changed in significant ways in recent years. Emerging technologies have opened up new ways of doing business that give workers more flexibility and control. The report argues federal agencies have failed to adapt to the changes and have instead opted to expand on outdated laws and institutions like labor unions.

“Recent regulatory efforts by those agencies have sought to restrict flexible work arrangements and well-established business-to-business relationships, while giving favorable treatment to labor unions,” the report states. “Members of Congress must resist efforts to politicize regulation, adjudication, and legislation in labor relations.”

The New Deal consisted of many policies that fundamentally transformed the economy and society during the 1930s. President Franklin D. Roosevelt ushered in the changes in response to the Great Depression. It included laws that govern wages, union organizing, worker rights, and many other critical policy areas.

“The National Labor Relations Act sets the rules for union elections and unfair labor practices,” the report states. “Much of it is outdated and needs reform. The Employee Rights Act, a comprehensive reform measure introduced in the past two Congresses, would go a long way toward bringing labor law in line with the needs of the 21st-century.”

The Employee Rights Act would change union relations is several key ways. It would require secret ballot elections and mandate that unions hold reauthorization votes to remain in a workplace. The report also urges lawmakers to end a loophole that it claims has allowed for union threats and violence.

“One such restriction should be outlawing union violence,” the report states. “The U.S. Supreme Court’s 1973 decision in United States v. Enmons created a loophole in the Hobbs Act, a major federal anti-extortion law, that exempts unions from prosecution for violence committed in the course of promoting union goals.”

The National Labor Relations Board (NLRB) was established during the New Deal to oversee union elections and resolve labor disputes. It was designed to be impartial so that unions, employers, and employees are treated fairly. The report argues the board has failed in its duties to be unbiased.

“Almost all NLRB members have had either a business or union background,” the report states. “Consequently, most Board members have a predisposition to favor one side or the other. With nearly all Board members having a bias, the NLRB has been unable to act in an impartial manner, as it was created to do.”

President Barack Obama and his administration have altered labor policies in some very significant ways. The NLRB has changed how union elections are held, how companies can contract together and how workers are classified. The Department of Labor (DOL) has tackled policy areas like overtime and federal contracting.

The report argues the changes have made the outdated labor laws worse. Republicans will soon have the chance to change the New Deal labor policies and the Obama era reforms.

The NLRB and DOL did not respond to a request for comment by InsideSources.