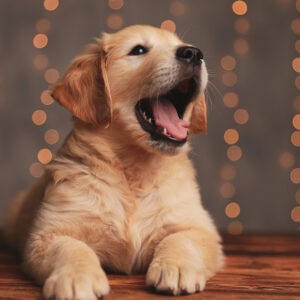 Why the Need to Learn Dog-Speak?

Let’s say yours is one of the 11 million U.S. households that welcomed a dog into your home last year. You were beyond excited. Life was lonely and dull. Your kids suggested you get a furry creature. “He’ll keep you company. Before you know it, you’ll wonder how you ever got along without one,” they said.

You went to a rescue shelter and, luck being on your side, you were able to snag a sweet mutt in no time flat. Those in the know said he was a “Heinz 57,” meaning he packed multiple breeds in one 35-pound dog. You named him “Heinz” in honor of his lineage, of which you knew practically nothing.

Early on in dog ownership, you wondered whether people confused the smarts of a dog with their love for a dog. You didn’t think Heinz was terribly smart. He would routinely tear up his squeaky stuffed animal, which landed it in the trash. You would replace his toy with a new one and caution Heinz to take better care of his toys so that he could play with them the next day.

After more toy purchases and more shredded remains, you took your argument up a notch. “Heinz,” you said firmly, “Money doesn’t grow on trees. I can’t keep replacing your squeaky toys because you are too exuberant.” Since nothing changed in Heinz’s behavior, you wondered whether he understood even a single word of your tirade.

You smartly decided to get him out of the house for an active hike. “That’ll tire him out,” you told yourself. Your hike took you into the woods, up hills, and even into the water where Heinz splashed away. No matter—you had towels in the car, you told yourself. You got faint when you saw Heinz almost catch a squirrel. The mere thought of something so grim had you closing your eyes.

You returned from the excursion exhausted. You looked forward to your well-earned nap, with a fully dried-off Heinz nearby. You said to yourself, “My kids were right. What a sweet afternoon,” as you fell into a gentle sleep.

Suddenly, your relaxed state was broken because Heinz barked when through the window he saw the mailman. It was John, the same guy Heinz has seen for months. You explain, “That’s John. You know him. No need to bark.” You suspected Heinz didn’t really hear you, and that he would bark again the next day. Your explanation that John was familiar and a friend had no impact.

Fresh from barking, Heinz now had energy and wanted to play. Your substantial outing didn’t count for a thing. Didn’t he know that after a good walk comes good downtime? “Can’t you see that I am tired and need a nap,” you said out loud?

Dedicated dog owner that you are, you took him for a walk around the block to calm him down. Heinz saw your 87-year-old neighbor who loves dogs. Angela put out her hand to pet Heinz. Next, she welcomed him with a tummy rub. She told him to “stay” while she got him a treat. He stayed — in perfect posture–nary a whimper or bark. She came out of her house with a Milk-Bone and said, “Gentle” while he nibbled away at her treat.

You were proud and confused. Angela told you that you’ve got a great dog. “But I don’t think he is very smart,” you responded. Angela had this knowing smile and somehow never needed many words to make her point. “You might want to rethink who the smart one is,” she said. Then she added, “Dog-speak is a different language. Check it out.”

Angela headed back inside her home and Heinz began to follow. You held him back and explained “consequences.” You told him that you won’t let him out as frequently if you can’t bring him back in. Angela might not get him treats if she thought he would follow into her house (never a bigger lie have you told). Finally, you admitted to Heinz that his appreciation for Angela had hurt your feelings. “It’s as if you prefer Angela,” you told him.

And then, you heard Angela’s words: “Dog-speak.”

Does anyone know where I can sign up for classes?