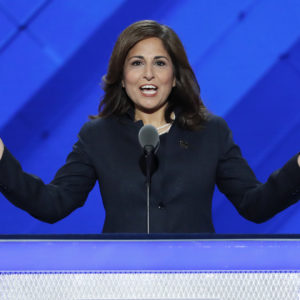 If you don’t know who Neera Tanden is, you should. She is not only the CEO and president of the liberal think tank Center for American Progress (CAP), but she is a longtime friend and adviser to Hillary Clinton.

But Tanden has come under recent scrutiny for essentially running CAP like a mini-Clinton White House instead of a center for progressive ideas, just waiting for the day the former secretary of state is inaugurated, so Tanden can take a position within her administration.

The latest WikiLeaks email dump has given people a rare inside look into the Democratic presidential nominee’s campaign, and Tanden is a big player in that, showing how CAP and the campaign are very close.

Tanden first started as an associate director for domestic policy in Bill Clinton’s White House and senior policy adviser to the first lady. In 2000, she was Hillary’s deputy campaign manager and issues director for her New York Senate campaign. She also served as a policy director for Hillary’s 2008 presidential run and eventually served as a senior adviser for health reform during President Barack Obama’s presidency.

While she has no formal role with Clinton’s 2016 White House bid, she constantly stays in touch with John Podesta, Clinton’s campaign chairman, whose emails were illegally hacked and published by hacktivist group WikiLeaks this week. Podesta also previously served as president of CAP, highlighting the close relationship between Tanden and one of Clinton’s right-hand guys.

In many of the emails, Tanden offers advice or gives policy ideas to Podesta and other Clinton aides. For example, Tanden emailed Jake Sullivan, a top foreign policy adviser, Jennifer Palmieri, Clinton’s communications director, and Podesta on June 2, 2015 to talk about the U.S. Supreme Court’s impending ruling on the Affordable Care Act. 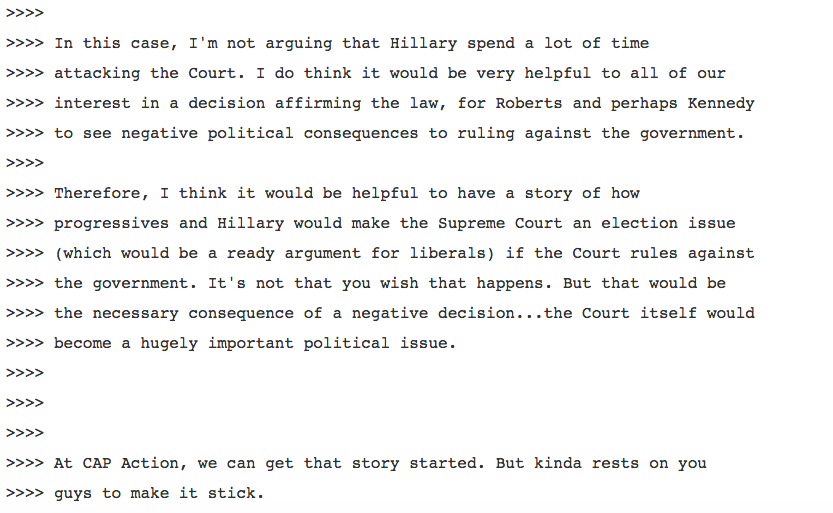 Email from Neera Tanden, president and CEO of Center for American Progress (Photo from WikiLeaks)

“I think it would be helpful to have a story of how progressives and Hillary would make the Supreme Court an election issue (which would be a ready argument for liberals) if the Court rules against the government. It’s not that you wish that happens. But that would be the necessary consequence of a negative decision…the Court itself would become a hugely important political issue,” Tanden wrote in the email.

She then suggested that the CAP Action Fund, the political advocacy arm of CAP which Tanden is also in charge of, could “get that story started. But kinda rests on you guys to make it stick.”

And it looks like Tanden did what she suggested she would do. On June 21, The Atlantic wrote a story about how the Supreme Court ruling could be one of the first policy tests for 2016 presidential candidates. Tanden is quoted saying how Democrats would respond to an overturn of Obamacare with a “much broader critique.”

“You would see really two strands of response,” she said. “One is on the Affordable Care Act itself, and the other is on the role of the courts.”

This is the clearest example from the emails highlighting the coordination of CAP and the Clinton campaign, suggesting the two entities are in lock-step with each other.

It’s not necessarily surprising that Tanden would advise Clinton’s campaign and use her organization to help Clinton, but since CAP claims to represent progressive ideas, many people would assume that the organization would not take a side in the Democratic presidential primary or would even go as far as to support Clinton’s primary rival, Bernie Sanders, a self-identified democratic socialist.

While CAP never publicly said they wouldn’t get involved in the primary, the emails show there was some negative discussion about the Vermont senator and his policies.

In an email chain about supporting a $15 minimum wage, Tanden and Sullivan suggested that people who supported the wage increase — which was a significant cornerstone of Sanders’ campaign — were part of the Red Army, a name given to the Russian military during communist leadership.

“Calling the ‘Fight for $15’ minimum wage campaign a modern-day communist ‘Red Army,’ these emails reflect how Clinton and her liberal allies at CAP really feel about the disastrous economic consequences of these policies,” said Jeremy Adler, communications director for America Rising Squared, a non-profit research firm that promotes conservative policies, to The Daily Caller. “As she famously noted, Clinton will say one thing in public and another in private — unfortunately in this case she’s willing to put millions of family-supporting jobs at risk to help herself politically.”

Tanden has also received heat for saying, “What’s wrong with the people of NH?” after Sanders’s First in the Nation primary win.

This doesn’t sit well with Sanders supporters and former employees who saw CAP as an organization pushing progressive ideas, but ended up just being a political machine for Clinton.

In the email leak, some emails also pointed to coordination between ThinkProgress and the Clinton campaign.

In one example in February 2016, Legum sent Podesta a link to an NBC story about Sanders defending rapper Killer Mike, one of his highest-profile supporters.

An email from Judd Legum, founder and editor of liberal political blog ThinkProgress at the Center for American Progress, to Hillary Clinton campaign chairman John Podesta about a Bernie Sanders story. (Photo from WikiLeaks)

Legum highlighted a quote from Sanders explaining why Killer Mike isn’t sexist for urging Clinton supporters to vote for Sanders.

“I don’t go around, no one has ever heard me say, ‘Hey guys, let’s stand together, vote for a man.’ I would never do that, never have,” the Vermont senator stated to which Legum added, “Needless to say, he doesn’t say that because he doesn’t have to.”

The WikiLeaks emails has intensified many frustrated feelings that Sanders supporters have about the primary process being rigged by the Democratic National Committee in favor of Clinton.

The fact that CAP, who according to their online mission is “dedicated to improving the lives of all Americans, through bold, progressive ideas, as well as strong leadership and concerted action,” is seen coordinating with the Clinton campaign to push her ideas and campaign, isn’t helping members of the Bernie or Bust movement join the Clinton camp.

One user on Reddit perfectly summed up the movement’s thoughts on CAP:

“I used to work for CAP until I left earlier this year. I left in part because of we were to be a progressive organization we should have been behind Sanders 110%,” the user wrote. “Instead the entire organization has been retooled to be a pseudo PAC for [Hillary] Clinton. Also, Neera Tanden is just waiting and using CAP to get herself a cabinet post in a Clinton administration.”

Tanden has not publicly responded to the email hack yet and the Clinton campaign is claiming that the Russian government is trying to influence the presidential election.