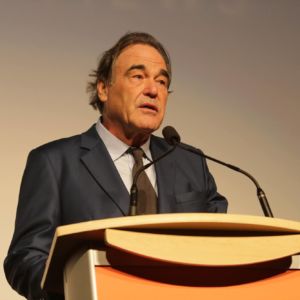 With ‘Snowden,’ Oliver Stone Fails His Subject — and Himself

In at least two ways, Oliver Stone’s Edward Snowden biopic feels like a rescue mission. The New York Times says it’s meant to revive the director’s reputation, after a slew of disappointing recent releases. Activists hope it boosts the public standing of the National Security Agency whistleblower himself, maybe even helping secure him a presidential pardon — and path home from Russian exile — before Barack Obama leaves office.

But as a means of improving either man’s image, this movie, which opened nationwide last Friday, is a failure — a missed opportunity to convert Snowden critics or even grapple seriously with their chief concerns. The film has its moments, but all too often Stone lapses into lazy lionization and turns complexity into a cartoon.

What follows is the story of how Snowden came to join the NSA after serving in the Central Intelligence Agency, and why he decided to leak copious amounts of classified information revealing massive, indiscriminate global spying by the United States and its allies. Joseph Gordon-­Levitt is actually quite good in the central role, adopting the whistleblower’s strange speaking style and computer-geek introversion. Ditto Zachary Quinto as a defiant and righteous Greenwald, Melissa Leo as a maternal Poitras and the great Tom Wilkinson as another veteran reporter who worked on the Snowden disclosures, Ewen MacAskill.

Other performances, though, are less successful. Nicolas Cage has an absurd bit part, and he sticks out like a sore thumb. The film really enters into the realm of cringeworthy with the introduction of Snowden’s now-longtime girlfriend Lindsay Mills, a free-spirited photographer played by real-life Bernie Sanders booster Shailene Woodley. Their romance is clearly supposed to provide balance to the film, along with emotional stakes, yet it features so much melodrama and disastrous dialogue it’s utterly distracting.

Take an early example, where the pair probe their political differences walking through an anti-war protest outside the White House. Woodley, who in fairness can’t always help the script she’s given, says something playful like, “How am I ever going to change your mind?,” and leans in for a kiss.

Then, as their lips part, Gordon-­Levitt offers this truly jaw-dropping reply — a clunker for the ages.

“Does nothing for me,” he says, feigning disinterest. “Tastes like liberal.”

Saliva sampling aside, the biggest weakness of “Snowden” is its refusal to take seriously defenders of the system it critiques — or address legitimate questions about the whistleblower’s current relationship with Russia. More nuance might have broadened sympathy for his cause, casting his actions as imperfect but ultimately justifiable. Instead, Stone goes for fairly straightforward hero worship — one polarity of the #Patriot vs. #Traitor debate — and reduces arguments against Snowden to hackneyed soundbites.

The film might succeed in making the White House squirm a bit, particularly with damning archival footage of the president promising to protect whistleblowers and champion civil liberties. Still, if Barack Obama is going to pardon Edward Snowden, it won’t be because of movie magic.