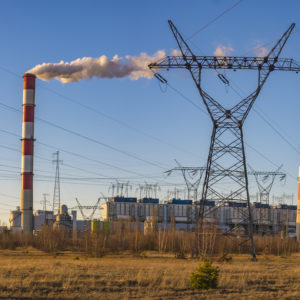 On Tuesday, war-torn Syria announced that it would sign on to the Paris Climate Agreement, leaving the United States standing alone as the sole country not to have signed the treaty pledging major reductions in carbon emissions. President Donald Trump pulled the U.S. out of the agreement in June. This means that no American representative has been invited to the upcoming climate forum set to meet in Paris on December 12. While the decision to pull out of the deal had diplomatic consequences, the U.S. has dramatically lowered its carbon emissions in the last year, largely without government mandates. These emissions reductions came as the result of price drops for both natural gas and solar panels. How significant this reduction is, however, demonstrates the challenges of gauging emissions on a global scale.

During the past two decades, the U.S., along with many Western European countries, has made emissions reduction and energy efficiency major priorities. Both through regulations that mandated stricter emissions standards for cars and power plants, as well as the deployment of new technology, the country has been able to dramatically reduce how much carbon dioxide it puts into the atmosphere.

Since 2006, U.S. carbon dioxide emissions have been reduced by 11 percent. The trend towards lower emissions has continued as electricity generation transitions away from coal. In 2016, the U.S. reduced its carbon emissions further by 2 percent. This has been a dramatic decline, as this graph, from U.K. climate scientist Robert Wilson demonstrates. 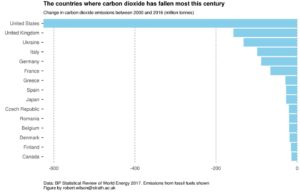 Much of this decline has come from the fracking boom, which caused much of America’s electricity generation to switch from coal to natural gas. Between 2008 and 2012 alone, U.S. coal consumption decreased by 50 million tons each year, a change that had significant effects on American carbon dioxide emissions.

The question is, will that be enough? According to tonnage, U.S. reductions in carbon dioxide dwarf those of the rest of the world. The significance of these reductions is debatable though, because of the size of the American economy in proportion to the rest of the world. Despite the massive tonnage of its reductions, the U.S. did not make the same percentage changes that some European countries, such as Germany, did.

These numbers point to the bigger hurdles that the global carbon reduction campaign will have to mount in the near future. Speaking cumulatively, America has emitted more carbon dioxide than China or India, since it became an industrial powerhouse far earlier. Today, however, Chinese annual emissions are twice what American emissions are. As China continues to develop its consumer goods production and expand the construction of housing, it will continue to contribute to global warming to an outsized degree.

So far, China has only committed to reducing its carbon intensity. That is, the amount of carbon dioxide pollution released for each dollar of economic activity. Even under the terms of the Paris Agreement, it has not made any promises to cut its overall emissions before 2030.

Modernizing economies, led by China and India, have been the greatest sources of new carbon dioxide emissions since 2000. Even as the U.S. works to clean up its power generation, these economies continue to rely on coal to electrify their cities. In this web of numbers, global perspective is complex. Since the start of the 21st century, the U.S. has put a significant amount of effort and resources into clean energy and has succeeded in reducing its carbon dioxide emissions. As the world looks to reduce overall emissions, it will need to look beyond just western economies to include newly developing countries.

The U.S. may be cooking with gas, but the Chinese aren’t, at least not yet.