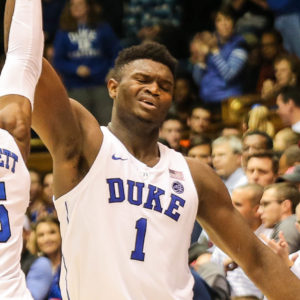 Zion Williamson in the Center of National Discourse

Zion Williamson is a teenager with ultra-wide shoulders. He also weighs 285 pounds packed into an Atlas body. He can jump 45 inches in the air after taking a step or two. He poses for photos alongside giddy youngsters with physical disabilities. He appears in gender-reveal videos for couples announcing the sex of their expectant child.

The consensus national college player of the year is the most well-liked — and most talked-about (sorry, LeBron) — basketball player in the world. He even made Duke University, owner of probably the most-despised college basketball program in the nation, likable again to some of those numerous haters out there.

Though he’s the focal point of the hottest, high-drama soap opera in the sports realm, this tale is moreso about branding and marketing.

This high-stakes spectacle started with the annual National Basketball Association Lottery, held May 14 in Chicago. The drama began with perceived body language and a contemporaneous tweet.

When NBA deputy commissioner Mark Tatum announced that the New Orleans Pelicans had won the lottery, all cameras shifted, of course, to Williamson, the star prize of the NBA Draft set for June. To many of us, Williamson, sitting in the audience with other top draft-eligible college players, appeared a bit forlorn when the Pelicans prevailed.

Then, Marc Spears, NBA writer for “The Undefeated,” a boutique website owned by ESPN, tweeted the posting that reverberated throughout the sports community:

“Zion Williamson was QUICKLY whisked out of the room after Pelicans were announced the winner of the draft lottery. Source said the former Duke star was rooting to go to New York, but now is going to New Orleans.”

Wow is the word.

Speculation abound. Conspiracy theorists emanated from the woodwork, asking was the NBA rigging the lottery to give smaller markets a boost in starpower (remember, the Pelicans and  Memphis Grizzlies finished Nos. 1 and 2 in the lottery, and they happen to be the league’s two smallest markets).

Would Zion try to force his way out of New Orleans via trade, especially since the Pelicans’ best current player, superstar Anthony Davis, previously expressed his desire to get out of town, possibly to the Los Angeles Lakers or New York Knicks. Or would Zion stay if the Knicks drafted his best friend/roommate, R.J. Barrett of Duke, and packaged him to the Pelicans in exchange for Davis? Or what if Davis himself stayed?

Or would the phenom with the million-watt smile who turns 19 in July return to Duke for his sophomore season? Would he exercise his sizable leverage?

And Zion has garnered nearly 3 million Instagram followers. When Duke played archrival North Carolina back in February, the game went “Hollywood” as some ticket prices zoomed to $2,500 to $5,000.

All because of this Zion guy, known for his creative dunking ability and silky-smooth ball-handling skills on the court and his empathy off the court.

Just watch the informative news-feature video, “Zion: The Journey,” reported by Jerry Bembry of “The Undefeated.” The clip focuses on Zion growing up in Florence and Spartanburg, S.C. — and the townspeople.  One of those folks spoke of how Zion just loves people, regardless of race. Another iterated how Zion was an A-student who helped tutor him in his most difficult subjects. Another listed Zion’s membership on the Student Council and All-Academic Challenge Team. And yet another mentioned that Zion would sign autographs for all seeking one.

All of those qualities would be good for the NBA, because his humility and charisma would be welcomed, especially now. (Simply look at the wicked, off-the-field troubles involving some star players in the National Football League.)

Zion’s stepfather, former Clemson basketball player Lee Anderson, tried to quell any thought of a trade request for relocation or reunion at Duke, telling an ESPN radio station, “We’re excited about the prospects of coming down there (New Orleans) and getting settled and looking for a place to stay and all of these good things.”

There certainly is precedence for draft-eligible stars finagling their way out of unwanted cities or teams. John Elway did it; so did Kobe Bryant.

“Look, the average professional athlete only gets 3 percent of his income from endorsements,” Belzer said. “But elite players make most of their money off the court, off the field, and it’s not relevant which market they play in. Playing in Cleveland didn’t hurt LeBron James, just as playing in Indianapolis didn’t hurt Peyton Manning. If Zion is as good as everyone says he is, he will be OK.”

Despite his lofty prospects in the financial game, Zion would face a weighty proposition in trying to help return the Crescent City to a playoff town.

Fortunately, for Williamson, he has those extra-wide shoulders.