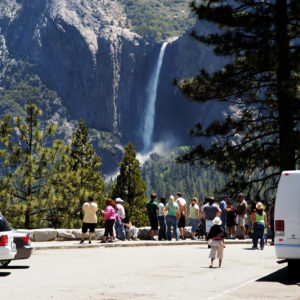 President Trump’s State of the Union address failed to mention the massive list of desperately needed repairs for U.S. national parks. The secretary of Interior and the National Park Service must find a solution to the $11 billion deferred maintenance backlog to keep America’s 59 national parks safe and accessible. Luckily, a promising solution lies in raising entrance fees to national parks.

The backlog means the NPS can’t make certain repairs, like fixing roads and water systems, making parks less enjoyable and sometimes unusable. A 2015 analysis of the backlog showed almost 40 percent of the $11 billion is in necessary road repairs. Increased fees might deter some people from visiting, but failing roads will also keep people away. Six percent of the backlog, $660 million, was in wastewater management systems. Raw sewage has already spilled into rivers in Yosemite.

Other parks have old, unsafe structures (some containing hazardous materials) that need to be repaired or taken down. While these structures remain, they are a danger to both visitors and the parks themselves.

As park visitation grows, the backlog is becoming even more serious. Record-breaking numbers of visitors attended the parks every year for the past three years. In 2011, about 277 million people visited a national park, but in 2014, visitation went up to 324 million. Since each additional visitor means more trash, more sewage, and general wear and tear on park services and infrastructure, fixing the backlog is more important now than ever.

To address this problem, the NPS suggested raising fees for a seven-day vehicle pass from $30 to $70 per car for 17 of the most popular national parks. That includes some of the most popular and well-known parks like Yellowstone, Yosemite, Grand Canyon and Arches.

Although critics worry the NPS’s proposal will price poor families out of parks, the increase is only during the peak season — those five warm-weather months when parks are overrun with families and buses of tourists. During the rest of the year, prices would remain at their current levels, allowing cheaper access to the parks to locals and those who are concerned about higher costs. While there are fewer this year than in the past, the NPS also offers occasional fee-free days, giving people the opportunity to go even if they can only afford the travel costs.

Though the park fee increase seems large, the new price is certainly reasonable relative to other leisure activities. For example, at $9 a ticket, a family of four going to see a two-hour movie costs $36. That’s half the cost of a week’s pass to one of the affected national parks during the busy season, after the price increase. This is a far cry from pricing middle America out of the parks.

But there are still other options the NPS should consider to address the maintenance backlog. For example, the NPS could allow park managers to change prices based on demand like many other recreational activities. If weekends are busier than weekdays, it might be economically practical for park managers to charge more on a Saturday than a Wednesday. This is the kind of economic thinking that, along with fee increases, could chip away at the backlog.

Allowing park managers to set prices would be much like theaters charging more for an evening showing than a matinee, or a restaurant’s early bird specials.

Unfortunately, current institutions aren’t well-designed to facilitate the use of the park manager’s local knowledge. The Federal Lands Recreation Enhancement Act vests power in the Department of Interior to set recreation fees. That places fees far outside of the power of park managers.

In fact, a 2015 report by Interior’s inspector general noted that changing fees is such a difficult process that it deters parks from updating them. By deterring changing fees in response to the needs of the park, these kinds of poorly designed rules ultimately threaten the beauty and serenity of America’s parks.

Opening new parks is usually a popular proposition, but maintaining them is not. Politicians trumpet new parks but have not been willing to allocate the resources necessary to maintain them. Because Congress has a history of ignoring the NPS backlog, it’s unlikely parks will find relief in higher budgets. Fee increases and giving park managers more authority to set their own prices would provide a promising alternative. Managers know their parks best and pairing the fee increase with greater autonomy for park managers could bring in extra revenue for essential repairs. The change represents a start of a more responsible conservation of our national treasures.