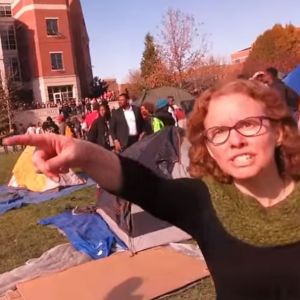 University of Missouri professor Melissa Click blocked journalists from covering a campus protest Nov. 9, 2015. The incident was captured in a viral video, thrusting Click into a national controversy.
News

University of Missouri professor Melissa Click incensed press freedom advocates in November when she shoved a camera held by a student journalist and called for “some muscle” to block the reporter from covering a protest on the public campus.

But on Monday, after Click was hit with an assault charge over this incident, two of the nation’s leading first amendment crusaders told InsideSources the professor’s actions didn’t warrant jail time, even though they violated the Constitution.

“Only the prosecutor can tell you why he filed charges, but it seems to me to be an overreaction,” First Amendment Center president Ken Paulson said in an interview. “Charging Melissa Click was very surprising because people get in journalists’ faces every day in every state of the union. There are confrontations with the news media at countless events, and prosecutors don’t pursue too many of those.”

In an emailed statement, Student Press Law Center executive director Frank LoMonte had a similar message. “Jail would be overkill for a person who poses no threat to anyone’s future safety,” he said.

Instead of serving a prison sentence, LoMonte proposed that Click complete a service project “that informs the public about the need for journalists to have access to public spaces to perform their essential watchdog role.”

“It’s important that Prof. Click pay some sort of penalty for having threatened to use violence to have a student journalist removed from a public space,” he said. “Whether the criminal justice system is the right place to impose that penalty is debatable, but certainly she should be made to pay consequences and to demonstrate genuine remorse, which we’ve yet to see with the exception of a rather perfunctory written statement.”

Click apologized for her behavior after it was captured in a viral video and generated significant backlash amid demonstrations over racial issues at the university. She said she regretted her “language and strategies” as well as “the way my actions have shifted attention away from the students’ campaign for justice.”

But that wasn’t good enough for many Click critics. Those who have called for her ouster include 100 Republican state lawmakers, Washington Post media writer Erik Wemple and David Steelman, who sits on the university system’s board of curators.

For her part, Click is currently seeking tenure and, according to the ABC News affiliate in Columbia, Missouri, planning to plead “not guilty” to the assault charge. Following calls for her firing, she received a public letter of support from 100 fellow faculty members.

Another side effect of the past few months is the spotlight that’s been shone on Click’s academic work. According to her university biography, “her research interests center on popular culture texts and audiences, particularly texts and audiences disdained in mainstream culture. … Current research projects involve ’50 Shades of Grey’ readers, the impact of social media in fans’ relationship with Lady Gaga.”