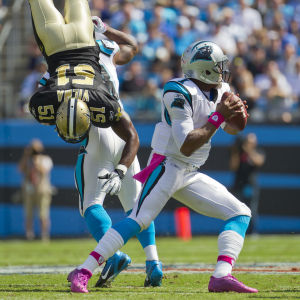 For NFL Super Bowl Quarterback Cam Newton, When Too Much Is Simply Too Much

A Quarterback Polarization Effect in Super Bowl 50? Check that, too.

Who would have thought that an NFL quarterback from North Carolina about to play in the nation’s most illustrious sporting event could rival Donald Trump as the most controversial person in the United States?

Self-professed “Superman” Cam Newton is a colossus of a black quarterback with an unparalleled skill set — both as a dynamic player and a warm-hearted humanitarian — while playing for the Carolina Panthers. Newton’s physical gifts are so pronounced that the Panthers’ Spanish-language broadcasters refer to him as “El Dinosaurio,” meaning “dinosaur,” as in there’s no one else like him in the game.

However, the 26-year-old quarterback also has been called “arrogant” because of his excessive on-field dancing antics, labeled as a “thug” because of his hand gestures and referred to as a “gangbanger” because of some Instagram photos that surfaced of him in 2015 with a group of black friends wearing bandannas during a May vacation trip to Mexico. Social media can be cruel that way.

Newton should be more concerned about the optics of his excesses that leave a Grand Canyon-sized chasm that’s way too open for interpretation.

The national case against Cam went viral when a Nashville-based public relations executive named Rosemary Plorin, a Tennessee Titans fan, wrote a letter to The Charlotte Observer expressing her disdain toward the demonstrative quarterback.

After attending a Panthers-Titans game with her 9-year-old daughter back in November, Plorin, who is white, wrote, in part, “Because of where we sat, we had a close up view of your conduct in the fourth quarter. The chest puffs. The pelvic thrusts. The arrogant struts and the ‘in your face’ taunting of both the Titans’ players and fans. We saw it all.”

Plorin’s letter created a firestorm; some detractors chided her as being racist, while some of her supporters claimed she merely was voicing the truth regarding sportsmanship.

OK, everyone should calm down. Take a deep breath.

Racial instigators want to make the Cam Newton Issue all about race in this case study of socio-cultural perception.

This issue is more generational than racial. Newton engages in extended celebrations after making first downs and scoring touchdowns. From week to week.

In fact, NBA commentator and Auburn University alumnus, just as Newton, Charles Barkley proclaimed on the Dan Patrick radio show last week: “Let me tell you something, as much as I love Cam Newton, if I played against Cam Newton, I’d put a hit on him, no question, because they rub it in pretty good . . .”

Many media analysts and pundits are over-complicating this debate. The real controversy here, absent the racial innuendos, is about extended celebrations, of which Newton consistently performs more than any player in the NFL. The key term is “extended.”

Therefore, the NFL could implement a time limit on all on-field celebrations, say no longer than two seconds. Or confine all celebrations to one gesture, as opposed to multiple routines or dances.

Or the league could ban all non-end zone celebrations. That means players, especially quarterbacks and receivers, would be barred from exhibiting the first-down signal, which is very common in today’s game. New England Patriots quarterback Tom Brady, for example, often displays the first-down sign after diving for a first down on running plays.

The old guard, Peyton Manning, who turns 40 in March and is Newton’s counterpart with the Denver Broncos for Sunday, celebrates like former Vice President Al Gore used to dance the Macarena at the Democratic National Convention in 1996. Not much movement.

Quarterback is a revered, CEO-like position in pro sports; therefore, it shouldn’t be transformed into an on-field solo audition for “Soul Train.”

Furthermore, the racial animus angle toward Newton is somewhat debunked because when Newton scored a touchdown in Nashville, it was mostly black Titans players on defense who confronted him about his prolonged antics in the end zone.

Newton unwisely increased the decibel level last week on this issue when he responded to a questioner about criticism directed his way, saying: “I’ve said this since day one. I’m an African-American quarterback that may scare a lot of people because they haven’t seen nothing that they can compare me to.”

Bad move on the part of an NFL quarterback who exemplifies the classic definition of polarizing: Many people love him, many despise him and only a hidden few are neutral.

By openly and publicly interjecting race into the equation, Newton may ultimately lose the benefit of the doubt in the event his football/personal life turns for the worse. Regardless of how many footballs he delivers to euphoric children in the coveted end-zone seats after scoring touchdowns or how many turkeys he delivers for Thanksgiving or how many gifts he delivers to hospital patients.

What separates Newton from other NFL quarterbacks is that he possesses a rare size-speed-athleticism combination. At 6-foot-5 and 245 pounds, he towers over, not only most quarterbacks in the league, but many players at other positions. His cannon-like arm strength, silky elusiveness and uncommon speed assisted Newton in becoming the first NFL quarterback to pass for at least 3,000 yards, throw at least 30 touchdown passes, rush for at least 500 yards and run for at least 10 touchdowns in a single season.

One other thing, though: After Newton posted the bandanna-vacation photo on Instagram, he then opted for sartorial splendor, displaying a photo of himself in a tuxedo with other dapper black males in suits.

Perhaps, that exercise was Newton’s way of tweaking the sensibilities of his most ardent critics.

But tweaking — like too many extended dances/hand gestures/head bobs — could come back to haunt him as Newton claims the mantle as the de facto new franchise face of the NFL.