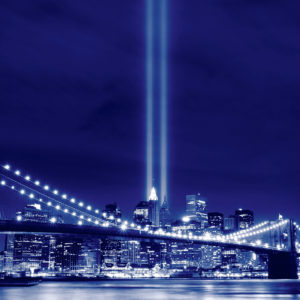 September 11 marks the 15th anniversary of the attacks on the World Trade Center and the Pentagon. As with the assassination of JFK and the attack on Pearl Harbor, 9/11 will forever be seen as a critical moment in American history.

For those who lived through the 9/11 attacks the anniversary brings up many unpleasant memories. I was young — a junior high school student. Our teachers told us there had been an attack, but refused to discuss it further. It was not until I got home and turned on the television that I began to understand that I was seeing something unlike anything I’d ever encountered.

Like many Americans, I was scared and worried about what the terrorist acts would mean for our country. I remember asking my parents if there would be more attacks and if there were terrorists living in the United States. I wondered what I would do if I or someone I loved was a victim of an attack. Although they tried to be comforting, it was clear my parents didn’t have the answers.

Lucky for me and other Americans, the chance of being killed (or even injured) in an act of terror is remarkably low — about one in 20 million. You are more likely to die while moving your couch, or from being struck by lightning, from falling out of bed, from the flu, or from brain-eating parasites!

Some would argue that this illustrates that government has done a good job since 9/11. Consider, however, that the number of Americans killed in terror attacks on an annualized basis has remained remarkably constant and low over several decades, with a few exceptions like 9/11. In the period from 1995 through 2014, for example, seven years saw no deaths in the United States related to terrorism. In six other years, one to four Americans were killed on U.S. soil in “terror-related” incidents. Even looking worldwide, the number of Americans killed in terror attacks pales in comparison to other causes of death. In 2013 just under 2.6 million U.S. citizens died. Thirteen of these deaths were terror-related, 0.0005 percent of all deaths. In 2001, taking into account the deaths from the 9/11 attacks, terror deaths still represented less than 0.2 percent of all U.S. deaths.

Yet despite these comforting numbers, Americans are less safe and less free than they were 15 years ago. The danger comes not from terrorism, but rather from the U.S. government. The War on Terror has enabled massive government expansion. The cost is not “just” the nearly $2 trillion in taxpayer money, but our liberty.

Consider that during the last 15 years, U.S. government has spied (and continues to spy) on U.S. citizens and international leaders. The U.S. government has used “enhanced interrogation,” otherwise known as torture, to combat terrorism. These techniques are not exclusively used in foreign combat zones, however. Recent investigations of the Chicago Police Department, for example, indicate that local governments have employed these same techniques at home, not against terrorists but against US. citizens.

Drones and other forms of extrajudicial killing are now standard practice. These activities not only fail to eliminate terror threats, but provide a rallying cry and recruitment tool for terrorist organizations, making Americans at home and abroad less safe. The push to use drone technology domestically by state and local law enforcement has substantial consequences for privacy. Militarized police, now on the “front lines” of the war on terror at home, have trampled the rights of Americans with a barrage of “no-knock” raids and unauthorized surveillance.

Moreover, those who speak out against these activities, whistleblowers who expose the wrongdoings of the U.S. government, are labeled as un-American, anti-military or even traitors, and punished. Meanwhile, questionable and perhaps illegal activity by government officials goes unchecked.

Many Americans look outside of the United States to determine who represents the biggest threat to freedom and safety. Fifteen years after 9/11, we’d do well to realize that the largest threat to our liberties comes not from people thousands of miles away but from our own government.