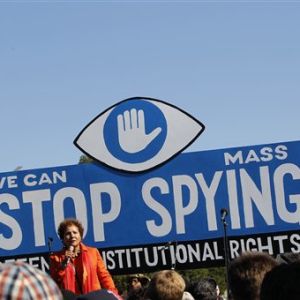 A bipartisan coalition of lawmakers across 16 states and the American Civil Liberties Union announced a series of legislative proposals Wednesday aimed at giving Americans greater control over their privacy, including limiting government surveillance and mandating tech companies get user permission to collect data.

Local legislators across the U.S. partnered with the ACLU to draft legislation mandating authorities get a warrant to deploy so-called “cell-site simulators” or “stingray” devices, designed to masquerade as cell towers while collecting private data from cellphones in a given area, including calls, texts, photos and location data.

Law enforcement agencies across the U.S. in recent years have upped their use of the technology, originally meant for anti-terror operations, often without a warrant. The ACLU-backed version would also require authorities to quickly dispose of data unrelated to investigations, frequently swept up from any phone within range automatically connecting to the device.

A final big ticket measure mimics the recently passed California Electronic Communications Privacy Act, and would prohibit the government from reading the contents of electronic communications without a warrant, in some cases applying the same standard to location tracking.

“A bipartisan consensus on privacy rights is emerging, and now the states are taking collective action where Congress has been largely asleep at the switch,” ACLU Executive Director Anthony Romero said in a statement Wednesday. “This movement is about seizing control over our lives. Everyone should be empowered to decide who has access to their personal information.”

“We are united in our belief that if the government has a legitimate reason for wanting to access someone’s communications or to use a device to track someone’s movements, it must get a warrant,” Romero wrote in a Time op-ed with Michael Boldin, executive director of the Tenth Amendment Center.

“We also believe that if corporations want to track what Americans, including our children, do online, on private social media pages, or in school, they must get clear and express permission to do so. Without a warrant or our permission, they simply shouldn’t be doing it.”

The leaders of both organizations said Americans “have become increasingly outraged and outspoken” about indiscriminate electronic government surveillance, often conducted without a warrant, and companies’ increasing reliance on user data to satisfy business models, legalized via esoteric user privacy agreements.

“In today’s digital age, governments and corporations are armed with powerful tools that enable them to access our personal information without our knowledge or consent,” Romero and Boldin wrote. “Coaches and employers can coerce us into revealing personal information we only want to share with our friends and family. This is unacceptable, and our current laws are not up to the task of protecting us. But as the states are making clear today, the time has come to take a stand.”

The group also expressed frustration with Congress, where privacy reforms including the Electronic Communications Privacy Act — enacted under the Reagan administration — have languished for years, despite broad bipartisan support for reform.

According to a Pew Research report cited by the group from last year, 93 percent of adults think being in control of who can get information on them is important, while 88 percent said they didn’t want someone watching or listening to them without their permission.

Ninety percent of Americans in a poll by Anzalone Liszt Grove Research said the next presidential administration should prioritize “protecting privacy so we have more control over our personal information.”

“In this era of political division, privacy is an issue that bucks the national trend and has brought both sides of the aisle together,” the directors wrote. “Republicans and Democrats alike strongly support laws that empower Americans to take control of their personal privacy.”