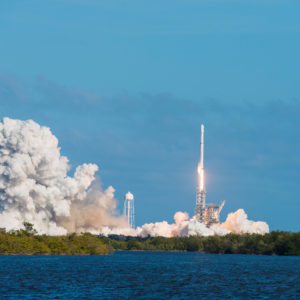 Although it was delayed, the launch of Artemis I has drawn renewed national attention to space travel. It is the first trip to the moon in 50 years, meaning nearly two generations of Americans have never seen a similar launch. The story led the news for days leading up to the initial August 29 launch date, and up to 500,000 people from around the world were anticipated to be at Cape Canaveral, Fla., to see the unmanned spaceship take off. The focus on Artemis is not surprising, but it is simply one of hundreds of launches happening almost every day that will have a much more direct effect on everyone’s lives.

In 2021, there were 1,807 objects launched into space, according to the U.N. Office for Outer Space Affairs, but that number is incomplete as 12 percent of worldwide launches are not registered with the office. The prevailing number of launches were by a few companies, including Blue Origin, India’s Space Research Organisation, OneWeb and SpaceX. Many of these launches are used for low-Earth orbit satellites, which operate between 500 to 2,000 kilometers from Earth and provide access to the internet.

As noted in Citizens Against Government Waste’s January 2022 report, “The Future of American Aerospace,” the privatization of space by companies like Blue Origin and SpaceX has led to lower launch costs for all satellites, providing cheaper access to space for businesses like broadband access and individual space travel. The number of objects launched into space in 2022 is projected to be greater than in 2021.

LEO satellite networks offer the opportunity for connectivity in areas that have limited or no broadband capabilities, not just in the United States but also around the world. SpaceX’s Starlink use in Ukraine is an example of how, with the proper equipment, such a network can be quickly deployed in remote areas. Reports indicate that 150,000 people in that country use the Starlink internet service daily, enabling continued connections despite the war.

On August 25, SpaceX and T-Mobile announced they would join to deploy broadband services to rural Americans. On October 26, 2021, Amazon’s Kuiper Systems announced it would be teaming up with Verizon to expand 5G coverage using broadband satellites. If the Federal Communications Commission approves the expansion of these services, millions more Americans will have access to broadband in areas that previously were unserved or underserved.

The satellites being sent into space need access to spectrum, including in the 17 GHz band, to provide broadband access on Earth. This is one reason the FCC’s August 3 report and order and notice of proposed rulemaking to update the 17 GHz rules was critical to satellite internet services. The report and order would enable geosynchronous orbit satellite (space to earth) operations in the 17 GHz band and allow geosynchronous orbit satellites to use the spectrum to reach fixed locations while adopting safeguards to protect existing users, including the incumbent direct broadcast satellite users of the spectrum.

Citizens Against Government Waste has promoted a technological and vendor-neutral approach for broadband deployment that uses the best technology for the region where networks are being deployed and strongly opposes any government-mandated preference or requirement for a single solution. Many technologies available can provide broadband across the country, and for rural and remote areas, satellite broadband should be among those available.

While moon launches are always thrilling and continue to expand knowledge of space and the universe, the more practical and effective use of satellites and rockets is to improve lives worldwide through increased access to online information and to bridge the digital divide. The FCC should continue to move forward in its efforts to increase the use of the 17 GHz spectrum for broadband access.

Deborah Collier is Vice President for Policy and Government Affairs at Citizens Against Government Waste. She wrote this for InsideSources.com