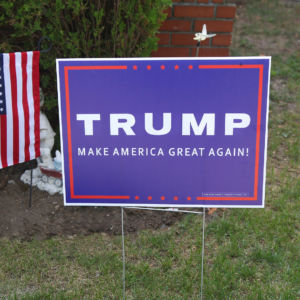 Do Lawn Signs Make a Difference in Political Campaigns?

Reports are coming in from across the country, as they do every four years. With just over a month to Election Day, lawn signs for presidential candidates are being stolen and defaced.

In New Jersey, a Hillary Clinton sign was replaced by a Donald Trump sign covered in feces. In New York, no less than seven Trump signs were stolen by, of all people, the former vice president of academic affairs at a nearby college. Maybe it was only a matter of time, then, before a Florida man — always, somehow, a Florida man — booby trapped his sign for the Republican nominee with an electric current and ended up literally shocking his neighborhood vandal.

But in this era of online advertising and social media, these headlines beg a bigger question: Are lawn signs really still valuable for political campaigns? Plenty of campaign managers resent them as logistical nightmares with a huge price tag. Do they actually make a difference?

The short answer, according to a first-of-its-kind study last year, is yes — at least a little bit.

Researchers at Yale University, Binghamton University and several other schools wrote that “signs typically have a modest effect on advertising candidates’ vote shares — an effect that is probably greater than zero but unlikely to be large enough to alter the outcome of a contest that would otherwise be decided by more than a few percentage points.”

For close elections, though, it’s a significant finding — one that actually surprised many the researchers. “I was skeptical [signs] would do anything,” one of the study’s co-authors, Yale University political science professor Alex Coppock, said in an interview.

But Coppock now says, “It’s not totally ridiculous to imagine that, in some places, in some elections, they actually make a difference.”

The study found candidates can get a 1.7 percentage point increase in votes with signs, and “a point and a half in treated areas is nothing to sneeze at,” said another co-author, Binghamton University political science professor Jonathan Krasno, in a separate interview.

Krasno said signs will always be valuable for small campaigns that can’t afford television, direct mail and other more pricey advertising. For their candidates, they convey organization and viability, sometimes raising name recognition if the office seeker isn’t well known.

But Krasno also came up with some strategic ways the presidential candidates could be deploying signs.

“If I were Clinton, I’d love to have a ton of signs in college dormitory widows on large campuses in battleground states,” he said, noting the Democratic nominee’s current struggle to excite young voters.

Similarly, Krasno thinks Trump would benefit from signs in areas where persuadable voters are feeling a little uneasy about him. “I’d look at these well-to-do suburbs where he’s supposedly not doing well,” he said. The goal would be creating social conditions that reassure voters leaning Trump’s way that they can in fact go through with their support.

That strategy would make sense to Republican consultant Jill Rulli, who said in interview that the biggest contribution of lawn signs “probably comes from creating — literally manufacturing — the idea of groundswell, that old peer-pressure mentality.”

In general, Rulli sees signs as “an increasingly outdated form of marketing,” but she acknowledges they can be useful in this specific way — this very localized form of influence in a community or neighborhood.