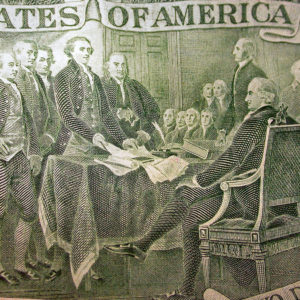 Accurate facts and history are under assault these days at every turn, from college campuses to Hollywood elites.

One of the more fashionable, historical falsehoods showed up front and center in an advertisement starring actress Janelle Monáe during this year’s Oscars, endorsing the premise that America’s true founding was not July 1776 but instead August 1619, when the first known slave boat arrived from Africa on America’s shores. Monáe’s voice is one of many others lately seeking to stoke racial grievance between races rather than unite and uplift our country.

In response to these troubling assertions, The Woodson Center in Washington, D.C. launched 1776, a coalition of scholars, grassroots leaders and advocates that challenges attempts to rewrite the founding of our nation as defined by slavery. The initiative provides an alternative perspective to the New York Times Magazine’s “1619 Project,” which aims to reframe our country’s history by claiming 1619 — the year enslaved Africans arrived in the English colony of Virginia — as the “true founding” of America.

The central premise of The 1619 Project is that America is hopelessly racist and a “slavocracy” rather than a “democracy.” We in the 1776 coalition know that The 1619 Project’s premise is flawed, and the nation is in danger if the 1619 idea takes root.

The Founding Fathers created a framework to empower all Americans, although, of course, this creed was not initially fulfilled However, members of 1776 believe the founding documents contained the instruments of their own improvement (including the Amendment process), thereby allowing a fulfillment this creed for all Americans.

This is why we believe that 1776 is indeed our nation’s true birthday. While we recognize slavery and discrimination are a tragic part of our nation’s history, through 1776 we choose to highlight America’s promise and to elevate the inspiring stories of blacks who rose and achieved and thrived — in spite of prejudice.

We are bringing both scholars and grassroots together to speak to both head and heart. Our 1776 coalition is mobilizing ordinary Americans of all races to speak up and stand up for America through essays, videos and other educational materials. Together we explain the promise of America, celebrate the virtues of our founders and counter voices describing our nation’s birth as something other than 1776.

Our 1776 coalition crosses political ideologies and includes Clarence Page, a progressive, Pulitzer Prize-winning columnist who is from the same hometown as J.D. Vance, author of the book Hillbilly Elegy. Page’s father and Vance’s grandfather worked at the same saw mill, and Page has been struck by how many of today’s societal struggles cross lines of class as well as lines of race.

Glenn Loury, an MIT-trained professor of economics at Brown University, is part of our 1776 coalition and offers his data-driven expertise in the state of black America. Our nationwide 1776 grassroots organizers, are leaders uplifting people from poverty; reducing incarceration (for example, Jon Ponder, a Las Vegas leader who ministers to men in prison); breaking up gangs, rescuing women from prostitution; and more. Their stories of redemption and restoration amplify the principles of our nation’s Founders.

We believe that some within the black community have degraded Dr. Martin Luther King Jr.’s message of racial reconciliation and contorted it into a dystopian hopelessness. At 1776, we choose instead to amplify voices of black achievement, forgotten historical figures who built their own thriving hospitals, schools and businesses when they were denied access to white establishments.

Our 1776 consortium of top black academics, columnists, social service providers, business leaders and clergy from across American are committed to telling the complete history of America and black Americans from 1776 to present with a look to the future in answer to Rev. Martin Luther King, Jr.’s famous question, “Where do we go from here?”

We seek to offer alternative perspectives that celebrate the progress America has made on delivering its promise of equality and opportunity, and highlight the resilience of its people.

We do this in the spirit of 1776, the date of America’s true founding.

Carrie Sheffield is a visiting fellow at the Independent Women’s Forum. She wrote this for InisdeSources.