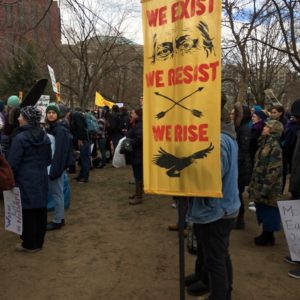 Over the course of 2016, energy infrastructure and particularly pipelines went from a niche concern primarily of interest to industry figures and policy wonks to a national news story. The Standing Rock protests not only drew more than 10,000 people to an out of the way spot of North Dakota, they brought the issue of energy development into the national consciousness, if only for a summer. The arguments made by the protesters focused on water contamination, but largely lacked a scientific foundation. In this way, the protests focused on an unspecified fear. Although this approach had been used for a variety of other causes, it hadn’t been widely adopted by anti-fracking campaigns. A 2012 report for the 11th Hour, a pro-green energy group, presages many of the tactics employed by the anti-fracking protesters, however.

The report, entitled “Public Health Dimensions of Horizontal Hydraulic Fracturing: Knowledge, Obstacles, Tactics, and Opportunities,” was prepared for the group by Seth Shonkoff, then a PhD student in environmental policy at the University of California Berkeley. In it, Shonkoff lays out the legal and technological landscape of contemporary fracking, specifically highlighting what is known about its impacts on public health and the footholds opponents might gain in trying to stop future projects.

Shonkoff begins his paper by acknowledging that it will be difficult to identify, much less prove, public health threats associated with fracking since environmental law exemptions at the federal level, as well as regulatory and legislative bills at the state level, “pose hurdles.”

“Robust, quantitative data that describes the interactions between fracking activities and public health are relatively rare for a variety of reasons,” Shonkoff writes. In lieu of this data, he suggests that NGOs, activists and others focused on regulatory reform instead focus their efforts on the other effects of fossil fuel drilling, such as increased CO2 emissions and the health effects of potential environmental contamination from other gases released in the drilling process.

Here, as in other places, the report is forced to acknowledge that much of the relevant data is unknown.

“No studies have focused on whether the type of geological formation being fracked influences the amount or type of air pollution produced,” he writes, before continuing on to discuss how changes in temperature influence how much fuel evaporates oil tanks. In this section, as in many others, Shonkoff discusses the theory of the science without providing statistics about how significant the change was.

Shonkoff casts a wide net in the paper, addressing the effects of fracking on not only air and water, but also on communities near drill sites. Despite the attention he gives possible harms resulting from fracking, the paper is largely pessimistic about the situation of local and federal regulatory authority and its ability to address the potential harms.

Despite Shonkoff’s clear ties to environmentalist causes, his paper raises key questions about the limits of environmental regulation. Since regulatory authority for drilling and fracking is divided between states and the federal government, loopholes exist in industry regulation and safety standards vary from state to state. This poses problems for anti-fracking groups, which would like to shut down the process altogether.

Anti-fracking activists face other difficulties in that, so far, almost no evidence links the extraction process to public health harms. Additionally, the fracking process itself uses a variety of different chemicals in geological formations that vary from area to area. It is a complex situation and the relative novelty of the technology means that it is difficult to connect any potential symptoms to the presence of drilling in the area.

“Due to this complexity and a dearth of exposure pathway information, it is difficult from a toxicological perspective to conclude that, for instance, geographic proximity to fracking operations causes headaches, bloody noses, fainting, memory issues, and other conditions,” Shonkoff writes.

Understanding the issue is further complicated by the fact that many of the chemicals used in fracking are protected by nondisclosure agreements, and since potential health outcomes manifest with relatively common symptoms, including headaches, fainting, and bloody noses, including other conditions.

According to Shonkoff, fracking opponents also run into trouble because the process is exempt from certain major federal environmental protection laws, including the Clean Water Act. Although certain states enacted their own legislation to address similar concerns, “the reality is that the primary focus of these agencies is to facilitate extraction of natural gas to increase public revenues; the focus is not on health and environmental protection,” the report continues.

As a result, Shonkoff proposes a multi-faceted strategy for fracking opponents to use to combat the growth of the industry. It involves peer-reviewed studies on the human health impacts of fracking, supplemented by citizen-monitoring of areas near fracking sites. However, he writes that a successful fight against fracking requires a broad citizen understanding of what the technology is and what its potential harms may be.

For this, he suggests that the anti-fracking movement centralize and organize itself.

“In order to facilitate and understand the scattered landscape of fracking reform,” he writes, “it would be helpful to fund a project to organize the lead actors, NGOs, policies, laws, market forces, CBOs, and scientific knowledge into a strategy landscape map.”

So far, no single group has come to occupy this role. Still, groups like the Indigenous Environmental Network, and the Bold Network have helped to centralize the protest movement, disseminating information about protests to a broad network of supporters. In fact, several environmental justice groups that Shonkoff highlights, including EarthJustice and the Environmental Working Group at the National Resources Defense Council have become more visible players in the anti-pipeline and anti-fracking movement.

While the report shows some of the structural challenges the current anti-pipeline movement faced, it also demonstrates how new many of the groups are. In the appendix is a list of NGOs, coalitions, and community groups committed to resisting fracking development. Some of these, which focus on Pennsylvania development, continue to influence state policy. At the same time, many current groups arose after the report’s publication. The Freshet Collective, the Bold Network, and every group founded to resist the Dakota Access Pipeline all were founded since 2012.

In this way, the report shows how the protest movement arose relatively quickly, moving into many of the openings Shonkoff highlights, but with a strong Native American influence that he did not predict.

The 11th Hour Project is a part of The Schmidt Family Foundation. While the overall foundation promotes shifting the economy away from an extractive model and towards something more regenerative and environmentally-friendly, the 11th Hour Project has a more specific goal. According to its website, the project works to promote “a fuller understanding of the impact of human activity within the web of interdependent living systems.”

Shonkoff had not responded to an email request for comment by press time.