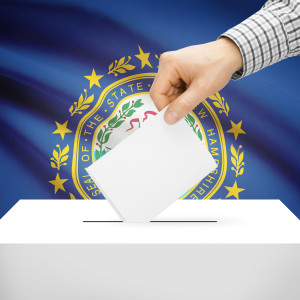 There are still four days left in 2015, but voting in the 2016 presidential election is already underway.

As University of Florida professor and Brookings Institution senior fellow Michael McDonald noted on Twitter, Dec. 26 was the day New Hampshire sent out its first absentee ballots, allowing votes to be cast.

Today's NH ballots are *sent* to military & overseas civilians; possible some will be delivered electronically -> votes can be *cast* today

McDonald also pointed out that many states allow military personnel and overseas civilians to receive their ballots electronically, printing them and completing them before sending them back online.

Ahead of the Iowa caucuses Feb. 1 and the New Hampshire primary Feb. 9, Republican frontrunner Donald Trump holds a commanding lead over the other GOP candidates in national polling. The latest RealClearPolitics average has the business mogul at 36 percent, followed by Texas Sen. Ted Cruz at 17. Cruz is ahead of Trump in Iowa, with 30 percent to the mogul’s 27, but Trump dominates in New Hampshire. He’s at 26 percent, besting Florida Sen. Marco Rubio at 12 as well as Cruz and New Jersey Gov. Chris Christie at 11.

Former Secretary of State Hillary Clinton continues to lead Vermont Sen. Bernie Sanders on the Democratic side, as national polling shows her at 55 percent to Sanders’ 30. (Former Maryland Gov. Martin O’Malley is mired in single digits.) Sanders looks to be giving Clinton the toughest competition in New Hampshire, where he’s ahead with 49 percent to her 43. Still, that race remains close, and Clinton could get a boost if she wins Iowa, where she currently bests Sanders with 51 percent to his 36.