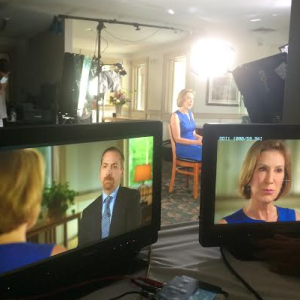 Carly Fiorina on NBC's Meet the Press (via Twitter)
News

2016 GOP Candidates Vow to Get Tough on China Over Hacking, Economy

Republican presidential hopefuls are staking out new foreign policy ground in the wake of the suspected Chinese hacking of the Office of Personnel Management, vowing to crack down on the world’s second largest economy ahead of Chinese President Xi Jinping’s scheduled White House visit next month.

Former Hewlett-Packard CEO Carly Fiorina, Wisconsin Gov. Scott Walker and frontrunner Donald Trump are all promising a more aggressive stance toward China than the current administration over cyberattacks like the one discovered at OPM earlier this summer, and in response to China’s recent economic impact on the U.S. economy.

Director of National Intelligence James Clapper called China ‘the leading suspect’ in the hack that compromised the personal information of 22.1 million current, former and prospective federal employees and contractors.

“We ought to make it very painful for the Chinese to be aggressive in cyber warfare,” Fiorina said on NBC’s “Meet the Press” Sunday. “It’s important to recognize that these cyberattacks that have been going on against the federal government systems, none of those are a surprise … We’ve known for over a decade the Chinese were coming after our most important systems.”

“In the Oval Office, what I would do now, given this period of weakness, is begin to provide our allies in the South China Sea with some of the technology they’ve asked for,” Fiorina said. “Be very aggressive about insuring that China does not control the South China trade route.”

“Now is the time to apply pressure to China, while they are focusing inward once again on trying to recover their economy,” the former HP CEO said about the country’s recent economic crisis, which pushed U.S. markets into a steep dive Monday.

Walker echoed those sentiments in a statement Monday, and called on President Obama to “focus on holding China accountable over its increasing attempts to undermine U.S. interests.”

“Given China’s massive cyberattacks against America, its militarization of the South China Sea, continued state interference with its economy, and persistent persecution of Christians and human rights activists, President Obama needs to cancel the state visit,” Walker said of Jinping’s September visit.

“There’s serious work to be done rather than pomp and circumstance. We need to see some backbone from President Obama on U.S.-China relations.”

Trump hit China specifically for devaluing its currency Monday, and used the impact on U.S. stocks as a way to knock the current administration’s disposition toward China, calling on President Obama to give Jinping a “Big Mac” instead of a “state dinner.”

“I would not be throwing him a dinner,” Trump said on Fox’s “The O’Reilly Factor” Monday. “I would get him a McDonald’s hamburger and say we’ve got to get down to work because you can’t continue to devalue. We’ll give him a state dinner and what he has done is suck all the jobs, suck all the money right out of our country.”

“It’s not so much the companies, it’s our government that allowed China to do this to us,” Trump continued. “Our government should have stopped China from devaluing … You know how they can? … They put a tariff on Chinese goods. You have to do that and then you bring it back to normal. You have no choice. You do that. China does it to us.”

“You think we sell to China without a tariff? They call it a tariff. I call it a tax. There is a total imbalance. You know what the big imbalance is? Intelligence. Their leaders are intelligent. Ours aren’t. We don’t know what we’re doing. We had to do this and it should have taken place a long time ago and you wouldn’t have this bubble right now.”

Fiorina used China as another opportunity to tout support for the Cybersecurity Information Sharing Act (CISA) — a bill that would allow private companies to share data about cyber threats with government agencies.

The bill divided the Senate ahead of it’s August recess, when Republican leaders pushed for a vote that failed to amount support from Democrats, excluding influential outliers on either side including California Democratic Sen. Dianne Feinstein, who helped draft the bill, and Kentucky Republican Sen. Rand Paul, who opposes the bill over its potential to violate user privacy among services like Facebook, Microsoft, Google, Twitter and others.

“There is a level of collaboration that’s required between the private sector and the public sector to detect and repel attacks,” Fiorina said of CISA on Sunday. “That requires an act of Congress. There is a bill that’s been languishing, frankly, in Congress for several years now. We need to get that bill passed so that level of collaboration is possible.”