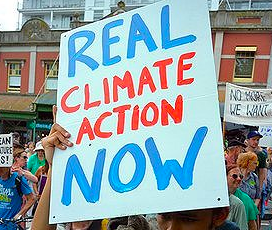 Forget the #BlueWave–what happened to the green one?

Last fall, green strategists predicted that a backlash against Trump administration environmental policies could help put Democrats back in control of Congress. As the campaign season nears its end, though, the green vote looks less like a wave and more like a puddle.

Polls show that even though fewer voters have confidence in President Donald Trump’s environmental policies than in President Obama’s,  it’s not motivating them to vote.  This is bad news for groups like the Environmental Voter Project, which has spent the past two years attempting to find hidden “climate voters.”

“Large numbers of latent climate voters have always existed – with as many as 20 million registered voters listing environmental issues as one of their top priorities – but historically, few of them turn out on Election Day,” said Nathaniel Stinnett, the founder and executive director of the Environmental Voter Project, late last year.

At the time, Stinnett predicted that “with the Trump administration explicitly denying the scientific consensus around climate change” environmentalists might finally be convinced that voting was important. Instead, races appear to be focusing more on economic issues, rather than environmental ones.

This is especially apparent in Colorado, where a ballot measure that would severely curtail fossil fuel development has received little support even from mainstream green groups. Initiative 97 would require that oil and gas wells be set back 2,500 feet from homes and schools, an increase from the current requirements of 500 feet from homes and 1,000 feet from schools. Enacting the law would leave 80 percent of non-federal land in the state off-limits to development, costing the state an estimated 100,000 jobs.

The measure was pushed by a fracking watchdog group called Colorado Rising, but it has received little funding or support from national environmental groups like the Sierra Club and the League of Conservation Voters.

“Big Green’s anti-fossil fuel agenda crashed and burned out west. They’ve seen the polling. Sure, they are pouring millions of dollars to back their preferred candidates, but they aren’t expecting any of the candidates to advocate for shutting down domestic energy production,” says Matt Dempsey, opinion editor of the Western Wire.

He explains that while the ballot initiative has received support from far-left groups like 350.org, it hasn’t been supported by the big, mainstream environmental players. Instead, the focus is shifting to candidates. Even liberal mega-donor Tom Steyer has stopped sending money to the League of Conservation Voters in favor of making small, but public donations in support of individual candidates.

In Colorado, Democrat Jared Polis is running  for governor on a platform to convert the state to renewable energy by 2040, but he’s had to balance economic issues as well.  At an event earlier this year, he told a state industry group that he “can’t ignore” the impact the oil and gas industry has had in making Colorado’s economy the envy of the nation.

And in Minnesota, a state that has long leaned blue but is trending purple, environmental issues are threatening to fracture the Democratic coalition. Minnesota’s Democrat-Farm-Labor (DFL) party has historically had a strong base of support in the Iron Range in the state’s northeast corner, but the party’s recent resistance to reopening the area’s mines has made key districts competitive.

“Rank and file Democrats and unions in Northern Minnesota are seeing that the Democratic party has left them,” says Kent Kaiser, a political communications professor in Minneapolis. “The people who live in the Iron Range and like their hunting and fishing and want development are seeing the contrast with tourists [from Minneapolis] who want to commune with nature.”

He sees this as a tardy continuation of rural America’s shift to the right.

“We have seen that for years there has been a dichotomy in the state, where Democrats need votes from grater Minnesota, so the green movement keeps quiet during the campaign and lobbies the representatives hard after the elections,” says Kaiser.

And in New Hampshire, Democratic candidate for governor Molly Kelly is running on an aggressive environmental platform against incumbent Republican Chris Sununu. However, she has been very careful to avoid taking a position on a large-scale natural gas project called Granite Bridge that is supported by local unions and promises to lower utility costs for customers currently using heating oil.  Environmental groups have made opposition to the pipeline their top priority, and yet every Democrat in the state senate signed a letter of support for the project.

It looks like, in 2018, Bill Clinton’s campaign guru James Carville was right: It’s not the environment, it’s the economy, stupid. Climate issues continue to poll near the bottom of Americans’ priorities.  Energy and development projects that bring jobs are still more important to voters than global warming.