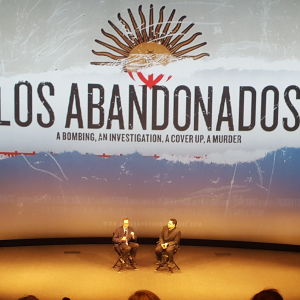 A Bombing, an Investigation, a Cover Up, a Murder

Imagine for a moment that a special prosecutor was appointed to bring charges against those responsible for the 9/11 attacks. The prosecutor determines Al Qaeda was responsible and tries to have the terrorists arrested and brought to justice. Then a presidential election occurs. Al Qaeda secretly funnels money to one of the candidates. In exchange, it wants a pardon and to sell oil to America. The bribed candidate is elected to the White House and then declares that America and Al Qaeda are allies. The special prosecutor obtains evidence of the secret deal and is scheduled to present his findings to Congress. But he is then found murdered. The American president declares there is nothing to see here, and we should move on.

This is not the elaborate plot of a Hollywood political thriller. This is a true story that happened not in the United States but in another democracy, Argentina, earlier this year.

If such a scandal took place here, it would shake America to its core. The murder would be thoroughly investigated. A popular backlash would almost certainly force the president to resign.

Few Americans took note of the assassination of Alberto Nisman. Perhaps that will change with the release of the new film, Los Abandonados, which premiered at Washington’s Newseum this week to a sold-out crowd. The film connects the dots and explains the international intrigue that led to Nisman’s death. It is now available for download on the film’s website.

Nisman was the Argentine prosecutor who had spent the past decade investigating the worst terrorist attack in Argentina’s history, the 1994 bombing of a Buenos Aires Jewish Center, where 85 people were killed. Nisman had proof that Iran, which remains the world’s leading state sponsor of terrorism, helped plan the attack. He had Interpol issue warrants for the arrest of several top Iranian officials in 2007.

But as Cristina Fernández de Kirchner ran for the presidency that year, the film alleges her mentor, Venezuela’s late socialist dictator Hugo Chávez, funneled money from Iran to her presidential campaign. A Venezuelan American citizen was caught bringing one shipment of $800,000 cash into Buenos Aires during the campaign. Chavez had close relations with Iran, and Ms. Kirchner has been widely suspected of corruption as her net worth has mysteriously grown exponentially since she and her late husband took power.

In exchange for the campaign funds and for the promise of Iranian oil to flow to energy-starved Argentina, Ms. Kirchner reached an agreement with the Iranian government to get Interpol to cancel the warrants. The deal fell through when Argentina was unable to convince Interpol to go along, but Nisman documented the machinations via wiretaps of top Argentine officials.

The night before Nisman was set to present his findings to Congress, an assassin entered his apartment and executed him. Ms. Kirchner quickly claimed Nisman had committed suicide, but she was forced to backtrack once the evidence became overwhelmingly clear that was not the case. Los Abandonados offers eyewitness accounts of how the government botched the investigation as it set out to prove Nisman’s death was a suicide when all the evidence pointed to murder. Ms. Kirchner remains in power.

Los Abandonados began production well before the Iran nuclear deal became a heated topic in Washington. But speaking after the premiere of the film, Director Matthew Taylor made the parallels clear: “This film is a guidebook of what happens when you do business with Iran.”

Argentina has suffered the consequences of its secret deal. Now, the United States, too, has stood by as Iran made secret deals with the International Atomic Energy Agency in relation to how the terrorist nation will be inspected for nuclear violations. President Obama and Secretary Kerry have not seen the agreements, and they failed to tell Congress about them. We only learned of them when they were uncovered by two members of Congress, but no American will ever be allowed to see them. The reason is obvious. Iran will not face the verification that Obama has promised the American people.

The United States will never confront the same level of corruption that allowed Iran to agree to funnel cash and oil to Argentina in exchange for get-out-of-jail-free cards. Instead, we have allowed others to make those secret deals while it is our country and our allies that are left, like Alberto Nisman, with the gun to our heads.