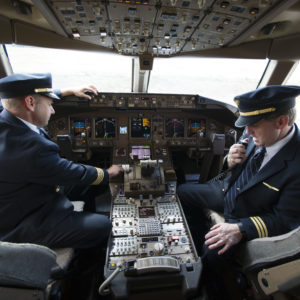 Airline pilots in a cockpit (AP Photo/Cliff Owen)
[IS] Opinions

The new infrastructure bill was born after interminably hard labor, delivering a vital expansion of the nation’s broadband capabilities. Special attention was paid to building out 5G infrastructure, the network technology of the future. But even as that’s taking place, a furtive regulatory agency drama is playing out that could undo much of the Biden administration’s broadband progress.

The Federal Communications Commission (FCC), which oversees use of the airwaves, has been planning for years to dedicate a piece of underused electromagnetic spectrum to 5G. The electromagnetic spectrum is the collection of wavelengths on which wireless communications travel, including the 5G networks consumers are demanding. Different users – the military, broadcasters, households – are only allowed to use specific wavelengths and the FCC allots those the way zoning boards issue building permits.

In 2017, the FCC began studying ways to dedicate underused pieces of electromagnetic real estate – the wavelengths between 3.7 and 3.98 gigahertz (GHz) – to new uses like mobile data and the expansion of 5G.  One question was whether that would interfere with users of neighboring spectrum, like commercial airlines that transmit between 4.2 and 4.4 GHz, the equivalent of two houses down the electromagnetic street. Airlines expressed concern about the impact on altimeters, which use the spectrum to bounce signals off the ground and determine an aircraft’s height.

The FCC took these questions seriously and did its homework. After extensive public comment, it built a “buffer zone” – an electronic vacant lot – of 22 megahertz (MHz) between the airline “band” and the one proposed for 5G.

Is that “a lot?” Yes. During public comments, major aviation players and industry analysts said a band of less than half that size would be sufficient for safe operations. The buffer zone in Japan is also half the U.S. size, and there have been no safety repercussions. France, Norway, Switzerland, Italy, Spain – they’ve all implemented a policy equivalent to our own with no safety issues.

But nonetheless, and despite being aware of the FCC’s plan for years and having participated extensively in the agency process, the Federal Aviation Administration (FAA) issued an eleventh-hour “Special Airworthiness Information Statement,” suggesting that “action might be required to address potential interference with sensitive aircraft electronics,” despite mountains of evidence to the contrary.  (Indeed, in the same order the FAA acknowledged “[t]here have not yet been proven reports of harmful interference due to wireless broadband”!)  So, why is the FAA rehashing an issue that’s been long resolved and holding up 5G when we are in a global race for broadband leadership?

First, the transfer of spectrum was scheduled to happen on December 5.  The FAA bulletin went out on November 2, a last-second Hail Mary.

Second, the FCC is understaffed at the highest levels right now; Congress has yet to approve the recent nominations of two new Commissioners. The FAA, in contrast, has a Trump administration holdover in place, no doubt happy to make mischief with Biden administration priorities like 5G.

And then there’s the age-old story – regulatory capture. The FAA’s administrator arrived there after 30 years at Delta Airlines. And on this issue, he appears to be carrying his old industry’s water.

Look, the FCC is not reckless. Its engineers and technical experts do not think planes falling out of the sky is a reasonable price to pay for consumers to watch Supercar Blondie on TikTok. It knows this stuff and has long experience allocating spectrum and developing safe protocols to avoid harmful overlap.  It also knows, as does the FAA, that plenty of planes have altimeters that work perfectly well adjacent to modern 5G deployments, including those now being used successfully all around the developed world.

And the FAA knows safe altimeter operations are possible. Over a year ago, the current administrator said airlines would simply need some transition time to upgrade older equipment. And now they have had it.

But the real issue, of course, isn’t time. It’s money, as airlines look for ways to avoid or delay upgrading older equipment – or make a case that taxpayers or someone else ought to pay. So, instead, they threaten fewer flights and use scare tactics about consumer safety as if public worries about air travel were a political hostage for them to use. An agency struggling to repair its “cowboy” reputation after waving through the 737 Max with hardly a second look owes the public more.

The FCC and the carriers planning to use the spectrum to boost 5G have agreed to a one-month wait before deployment begins in earnest to straighten this issue out. They shouldn’t delay any more than that. And the Biden administration, which has worked so hard to deliver a historic infrastructure bill and a giant step forward on mobile data, shouldn’t let its own FAA mess it up.

Ev Ehrlich is a former undersecretary of Commerce for Economic Affairs under President Bill Clinton. He wrote this for InsideSources.com.