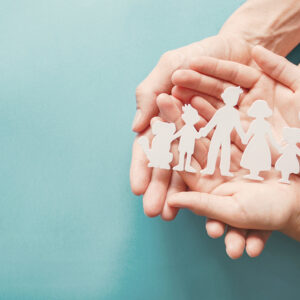 A CEO and LGBTQ+ Adoptive Parent’s Message to the Supreme Court: Contracts Matter

For years, my wife Laura and I sought to grow our family through adoption. But the discrimination we faced at every turn as a same-sex couple made it feel like an impossible dream.

One agency said they would not “collude” with us, like we were doing something wrong. Even after we found a family specifically looking for a same-sex couple to adopt their child, we faced incredible legal obstacles and bigotry on our journey to becoming parents – including harassment by the hospital and staff on the day our son Merrick was born.

No one should have to endure this distress to become a parent. Especially when it’s cloaked in the guise of religious freedom.

The First Amendment guarantees the foundational freedom to worship, free from government interference or penalty. It’s a sacred promise from our founders to all Americans.  But it does not allow any claim of faith to provide carte blanche to selectively ignore portions of government contracts or other requirements that prohibit discrimination.

And yet, that very issue currently sits before the U.S. Supreme Court. And the stakes are high. The Court’s decision will profoundly impact millions of LGBTQ+ Americans like me by either defending our equal protection under the law or opening the door to far more widespread and insidious forms of discrimination.

In many cities, foster and adoption services are provided by private agencies that contract with the city to place children into foster homes after they have been removed from their families, often due to abuse or neglect. In exchange for providing this service, agencies receive public funding and agree to a set of requirements stipulated by the city. In Philadelphia, these requirements included the stipulation that applies to all Philadelphia government contracts: entities receiving taxpayer funds must comply with the city’s non-discrimination ordinances. Philadelphia’s city ordinance is important because the lack of nationwide nondiscrimination laws means there’s a patchwork of city and state laws that protect only a portion of LGBTQ+ people.

Catholic Social Services (CSS), a faith-based foster care and adoption agency that refuses to accept same-sex couples as foster parents, feels that this requirement shouldn’t apply to them because of their religious objection to the Constitutional right of same-sex couples to marry. When the city told CSS that they had to comply with the nondiscrimination requirements – as every other contractor does – CSS sued on First Amendment grounds. CSS still contracts with Philadelphia to provide other foster care services, including managing cases and operating group homes, because they are willing to comply with all contract requirements in these contexts, but they still refuse to place children in loving, safe, and qualified homes of same-sex couples.

It takes neither a constitutional scholar nor a far leap of imagination to understand that CSS’s argument is as preposterous as it is dangerous. To begin, contracts cannot be unilaterally engaged in nor re-written at the whim of one party. The city doesn’t force any provider of any service to sign if they don’t want to adhere to the non-discrimination language. If CSS didn’t like the terms of the contract, they could try to negotiate it, they could stop providing the service at issue, or they could choose to serve a different city. As the chief executive of a small business, I know what a contract means and exactly what the consequences are if I don’t live up to my end of the agreement. It’s understood that neither I nor my customers can agree to a contract and then unilaterally opt-out of certain of its terms. Similarly, CSS shouldn’t be able to selectively ignore with impunity parts of a contract that they don’t like.

Second, the First Amendment is far too precious to allow it to be used as a sword for anyone who doesn’t like a particular requirement or law. If any group can simply cherry-pick which provisions of signed contracts they will comply with, it makes it nearly impossible for state and local governments to set standards for the provision of public services. Government contracts will be worth less than the paper they’re printed on.

If CSS prevails, there could be a sea change in the way that government-contracted, taxpayer-funded social services are provided. What will stop any government-funded social service provider from opting out of a contract requirement they don’t like? Could a taxpayer-funded homeless shelter deny their warm beds to people of a different faith? Could a job training program take public dollars but deny assistance to a person who is LGBTQ+? What would prevent any faith-based government-contracted social service provider from serving only the people who pass their religious litmus test rather than all those who need the service, as the government would be required to do if it was performing the service itself rather than contracting it out?

Everything we went through to bring Merrick home was worth it. He made us a family and for that, I would fight to the ends of the earth. But it shouldn’t be this way. The court should be focused on protecting individuals from further institutional bigotry, not easing restrictions, and opening the door for even more organizations to discriminate.

Nancy Lyons is the CEO of Clockwork, an award-winning digital agency in Minneapolis. She wrote this for InsideSources.com.