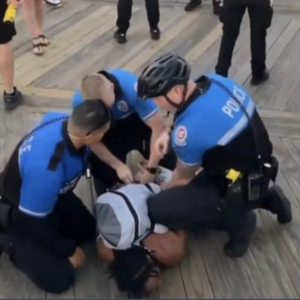 A Day at the Beach and the Consequences of Vaping Prohibition

Multiple videos emerged on social media recently of another confrontation between Black Americans and police officers. Just exactly what was the ruckus about? Several teenagers – all 18 or older – were vaping on the Ocean City, Maryland Boardwalk.

What’s the issue? For one, smoking and vaping are prohibited on the Boardwalk. The Ocean City Council’s top priority in 2014 was banning smoking and use of e-cigarettes there, except in designated smoking areas. The policy went into effect May 1, 2015.

At the time that the ban began, former city manager David Recor commented the city would not “haul people off to jail for smoking on the Boardwalk,” and that the city didn’t “expect to take a heavy hand, but expect visitors to self-police themselves.”

The opposite happened on June 12 when four teens from Pennsylvania were arrested after vaping on the Boardwalk. Initially, police confronted the teens and informed them of the smoking and vaping ban. But the teens continued to vape. What began as a small public nuisance matter became a violent altercation, with police eventually arresting the offenders for disorderly conduct, assault, and resisting arrest. Videos of the incident have gone viral and the Ocean City Police Department is reviewing its policy.

This isn’t the first instance of persons being arrested on the Boardwalk after being initially cited for violating the smoking prohibition. In fact, exactly one year prior to the latest incident, three people were arrested after police cited a Maryland man for smoking a cigar on the Boardwalk. As the “officer was attempting to write up a smoking citation … ‘several disorderly subjects’ started to gather” and interfered. Three individuals were eventually arrested for disorderly conduct and other charges, and one man was pepper-sprayed.

We can argue all day about whether the police or the teens in the recent incident were in the wrong. But that doesn’t address the underlying issue of well-intended government policies inflicting damage. When arguing the merits of the ban in 2014, Mayor Rick Meehan remarked it was “the right thing to do,” and that Ocean City must “always be cognizant of the health, safety, and welfare of [the] community and [its] residents.”

While protecting beachgoers from secondhand smoke is laudable, there was always an issue with enforcing the ban, as noted in 2014 by the Ocean City Beach Patrol. Further, a violation of the smoking ordinance is supposed to result in a fine, not arrest. But as evidenced from this weekend and last year, such petty offenses can lead to drastic confrontations.

American policing is facing heightened tensions and the most minute interaction can lead to deadly consequences. We have seen this time and time again when it comes to tobacco products. In 2014 – the same year Ocean City was mulling over its smoking ban – Eric Garner was killed by police after being accused of selling untaxed cigarettes in New York City. It is “home to most expensive cigarettes in the nation,” and the Empire State has an expansive black market of untaxed cigarettes. A 2014 independent evaluation estimated 60 percent of cigarettes consumed in New York state are “subject to tax avoidance/evasion, resulting in $2.2 billion in lost revenue.” Although Garner had previously been arrested for possessing untaxed cigarettes, repeat tax evasion does not warrant being executed. Garner was put in a chokehold that caused a heart attack leading to his death.

But instead of looking at instances of police interaction concerning tobacco products, lawmakers are proposing more bans and more taxes. The U.S. Food and Drug Administration is currently working on proposed rulemaking that would forbid tobacco manufacturers from selling menthol cigarettes and tobacco products. Lawmakers in the U.S. House and Senate have introduced a federal cigarette tax increase, as well as introducing a new federal tax on e-cigarettes.

Those proposals will undoubtedly lead to more police interactions as criminal enterprises fulfill demand in the wake of a menthol ban and smokers seeks cheaper tobacco products. After all, it will be the police who enforce such bans and policies. It’s not like the FDA has its own police force.

In a video from that weekend’s altercation, the poster noted that “this is all over a vape,” and it is rather ludicrous that one 19-year old’s vaping led to four arrests. It is also prime evidence of the consequences of prohibitions and other government actions that drive individuals to seek out illicit products or illegal behavior. Lawmakers should look at this instance, and the others before it, when arguing in favor of such policies.