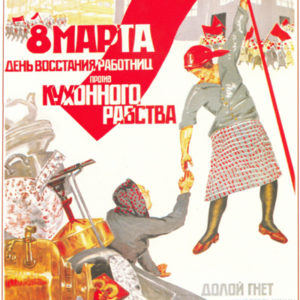 Most of the time, International Women’s Day is a holiday little-recognized and rarely-celebrated in the United States. This year, however, it has suddenly acquired the sort of attention it hasn’t had in decades. Opponents of President Donald Trump are turning International Women’s Day into a second women’s march, like the one that occurred the day after the inauguration. The event, dubbed “A Day Without a Woman,” is telling women to stay home and avoid both paid and unpaid labor to demonstrate the role they play in everyday American life. In 2017, “A Day Without a Woman” is a day without female workers or shoppers, a strange end for a holiday founded by socialists to commemorate a garment worker’s strike.

The first Women’s Day was not international. In 1909, the Socialist Party of America designated February 28 “National Women’s Day,” selecting the date to honor a garment worker’s strike in New York City the year before. At a meeting of the Socialist International in 1910, socialist groups in both Europe and America supported the idea of a day to honor the movement for women’s rights and to gather support for women’s suffrage.

Beginning in 1911, more than a million people attended Women’s Day rallies  in Austria, Denmark, Germany and Switzerland. The female marchers demanded not only the right to vote and hold office, but the right to vocational training and work.

During 1913 and 1914, International Women’s Day marches doubled as protests against World War One. In Russia, where casualties on the eastern front were shockingly high, women marched on the last Sunday in February to protest the war. Although demonstrations continued for several years on or around March 8, none of them are remembered as well as the march in 1917.

After years of wartime suffering, women in Russia striked for “Bread and Peace” in 1917. According to the Julian calendar used in czarist Russia, the march fell on the last Sunday of February. In the Gregorian calendar, this date was March 8. Four days after the march, the Czar abdicated. Within days, a new socialist Russia was taking shape.

In the United States, the holiday shifted from being associated with women’s suffrage to a connection with Communism. Despite the protesters’ ire towards Trump, the protests are not primarily a push for women’s rights.

Marches are organized around the world by various organizations each supporting their own list of the rights women ought to have. One of the largest is the International Women’s Strike, which was organized in 2016 by Polish women protesting a law that would have banned abortion. The group adopted tactics used by feminists in Iceland in 1975 and sparked grassroots protests around the world.

According to the official International Women’s Strike group, the protests this year signal their disapproval not only of Trump, but also a broad range of social and economic issues.

“March 8th will be the beginning of a new international feminist movement that organizes resistance not just against Trump and his misogynist policies,” the IWS wrote, “but also against the conditions that produced Trump, namely the decades long economic inequality, racial and sexual violence, and imperial wars abroad.”

The IWS group did not organize the “A Day Without a Woman” march, but the event’s website shows that American feminists agree with many of the same principles as their socialist sisters.

In Washington, D.C., the organizers of the city’s “A Day Without a Woman” event stand “in solidarity with the International Women’s Strike organizers.” Their list of goals is long, covering a laundry list of desires from freedom from gender norms to an end to hiring discrimination and “Gender Justice.” Notably, it includes language stressing the importance of unions.

“Unions and other labor associations are critical to a healthy and thriving economy for all,” the organizers write, while encouraging supporters to attend International Women’s Day marches if they desire. Women are encouraged to wear red as they spend the day neither working, nor shopping.

Despite the obvious association of red with socialist and communist causes, in Washington, the organizers of “A Day Without a Woman,” skirt the issue. They instead advocate wearing red as “a color signifying revolutionary love and sacrifice.”

The strike has attracted attention even before it began. By Tuesday afternoon, school in Alexandria, Va. was cancelled for Wednesday since too many teachers had requested the day off. Some restaurants with female owners were also planning to close or offer limited hours so that their employees could observe the strike.

Ironically, the angry tone of the forthcoming march is more radical than celebrations in Russia, where the day is generally commemorated by giving gifts to mothers, wives, and girlfriends.