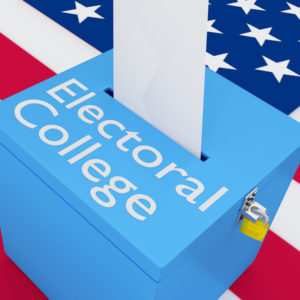 A Defense of Our Electoral College

As the dust settles on the 2020 elections – arguably one of the most contentious election cycles in modern political history – vast numbers of voters remain very concerned about our nation’s election integrity and the preservation of free and fair elections.

This concern is raised against the backdrop of a quiet, well-funded effort to bypass our Constitution and our existing system of electing a president, the Electoral College, in favor of a National Popular Vote Interstate Compact (NPVIC).

This well-financed assault against the Electoral College is waged by wealthy political activists who hope to transfer political power to a handful of highly populated states, engineer presidential elections for generations to come, and end the constitutional role that all 50 states presently have in electing a president.

Most Americans correctly believe a constitutional amendment is required to pass this scheme. However, supporters of the NPVIC have cooked up what they claim is a perfect “workaround” to the Constitution—a contract among a minority of states, called a “compact.”

Proponents of the NPVIC sell this plan to state legislators using fundamentally misguided arguments. Instead of trying to change the Constitution, supporters of the NPVIC use faulty logic to try and pass their unworkable idea.

The foundation of the NPVIC argument is that the population of the United States is supposed to elect the president, but that the limitations of 18th-century technology prevented that. This claim is false, just like the rest of their sales pitch.

Supporters of the NPVIC don’t understand that the President is the chief executive officer of the federation, and his or her duties, assigned by Article II of the Constitution, include leading the nation collectively and representing the states. The president isn’t supposed to control our domestic governance —that is the job of state governments.

States serve as the counterweight to the federal government as a vital part of the overall system of checks and balances the Founders devised.

Confusion has sprung from the fact that, since 1880, every state has asked its citizens to choose state electors. Populations have never been asked to directly elect a president for very deliberate reasons. The president’s popular election was brought up at least four times during the Constitutional Convention, debated, and firmly rejected every time.

The left-leaning NPVIC financiers are attempting to massively change this nation and dramatically weaken our states converting America into a monolithic democratic socialist country.

The foundation of the NPVIC sales pitch begins by making sure that everyone in the room believes that the American president is supposed to be elected by the general population in a direct democratic election, where a plurality – “the one with the most votes wins” – chooses the resident. They then add in the believable layer that in the 1780s, high-speed communications and travel could not even be imagined. Therefore, with their limited view of technology, the Founders had to create a handicapping system allowing for their 18th-century limitations.

History shows us, though, that the Founders did consider several times during the 1787 Constitutional Convention electing the president by a popular vote – and repeatedly, the Framers debated the idea and resoundingly rejected it. They knew, almost unanimously, from studying history that democracies tend to implode in short order. They realized that the population was the least informed segment in the country and the most easily manipulated.

There are numerous other deceptions and flaws in most of the NPVIC sales pitch as it solves none of the so-called “problems” that it advertises it will solve.

John Crawford is the founder of Keep Our 50 States, a grassroots political information and action group. He wrote this for InsideSurces.com.