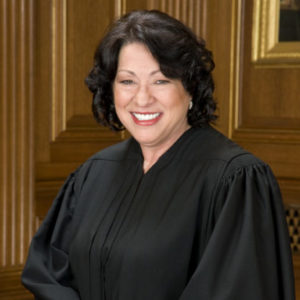 A Different Kind of Justice

The Hispanic lady from the Bronx strolled across the dais, heard resounding applause and hugged star-struck audience-members.

And you probably thought we meant Jennifer Lopez. Uh … no, we’re taking this scene to a higher court.

Sotomayor, 64, is the first Hispanic member of the U.S. Supreme Court and third woman — after Sandra Day O’Connor and Ruth Bader Ginsburg.

When then-President Barack Obama nominated Sotomayor to be an associate justice on the Supreme Court in May 2009, he lauded her as understanding “people’s hopes and struggles.”

And she writes children’s books. She’s also fearless. Perhaps that’s why she engages with the public despite her anxious 10-person security detail — eight men and two women — watching her every step and interaction with a book-loving public in a jam-packed 2,300-seat ballroom.

That was the blissful ambiance when Sotomayor recently appeared at the Washington National Book Festival, that annual frenzy of foot traffic totaling about 100,000 fans eager to see and hear their favorite authors.

Sotomayor, wowed by the exultant greeting she received from the admiring crowd, opened by saying, “This is so exciting, isn’t it? I wish every kid in this room could come up to the stage and see what I’m seeing. And I want to remind every kid that when you grow up, you can do this, too.”

Then, Sotomayor proceeded to converse with interviewer Carla Hayden, head librarian of the Library of Congress, and the audience about her formative years in a housing project in the Bronx. With juvenile diabetes. While admiring television defense attorney “Perry Mason.”

And how her love of studying puzzles and reading books — including encyclopedias — shaped her dreams and broadened her goals and interests.

Sotomayor told us, “I explored the world as a child through books and I saw the possibilities of things that I never could have imagined without reading.”

Two of Sotomayor’s new children’s books were released in September — a compelling illustration-based autobiography titled “Turning Pages: My Life Story” and a rich volume grounded in her middle-school years, “The Beloved World of Sonia Sotomayor.” (The books also are available in Spanish.)

On this day, Sotomayor discussed those books while on the move.

With microphone, she talked the talk and walked the walk as she wandered the aisles of the ballroom telling her life story. Yes, Sonia Sotomayor is a different kind of justice.

Let’s start with the housing projects.

Sotomayor told us, “Look, in my life there were no lawyers. I grew up in a housing project, which is a place where people without resources, the government helps them find housing. And so there were no lawyers in the projects and there were no lawyers anywhere in my life and so I had no opportunities to know about the law except in a bad way. A lot of my cousins and a lot of people I knew got arrested by the police and I knew they went to court and it was very painful for our families and friends. But that’s not a good image of what law is all about.”

She found her lawyer role model in the form of “Perry Mason” from the eponymously named television show that aired on CBS from 1957 to 1966. Mason, played by actor Raymond Burr, made a living defending the falsely accused in the courtroom.

As a child, Sotomayor also read the fictional mystery series “Nancy Drew,” the precocious teenage detective. Sotomayor initially desired to be a police officer, then aspired to be a detective. However, she felt her diabetes would prevent her from entering law enforcement. So, check the attorney box instead.

Sotomayor delves into great detail regarding her career thought processes as a youngster in “The Beloved World of Sonia Sotomayor.” Check out Chapter Seven of that book.

As Sotomayor traversed the ballroom, she met Maria. A 9-year-old. Maria had submitted a question via note-card to interviewer Carla Hayden.

Hayden read Maria’s question aloud: “Maria wants to be president. And Maria wants to know, what is your advice about what I should do now?”

Sotomayor found Maria in the audience.

She said, “Now, Maria, I walk and talk and I’m so proud of you for having big dreams. That is so important because you see, if you don’t dream big, you can’t become something big. And you have to start by studying because anything you want to be requires hard work and a lot of study …”

Then, Sotomayor asked Maria for a hug. She hugged 9-year-olds like Maria; she hugged adult questioners. All ages, races.

She told us: “You know, there were some writers who said when I was nominated for the Supreme Court, ‘You’re not smart enough.’ Those things hurt. When people show a lack of confidence in you, it sometimes scares you away from trying. But you can’t, because you know you and you know how strong you can be.”

Note that Hayden told us Sotomayor was the first author of children’s books to be featured on the Main Stage at the National Book Festival, which was launched in 2001 by then-first lady Laura Bush, a former librarian.

As we said, Sonia Sotomayor is a different kind of justice.