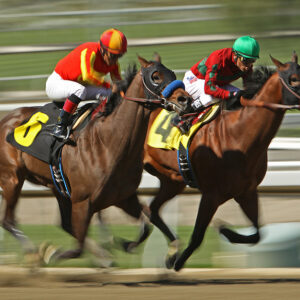 A Failed Drug Test Will “Stirrup” Trouble for Horseracing

Is horseracing a hotbed for animal cruelty? Some think so.

Famous horse trainer Bob Baffert is under fire after his horse Medina Spirit, the most recent Derby winner, failed a post-race drug test. Depending on the results of a second test, his horse could be disqualified.

This recent scandal has renewed anti-horse racing sentiments. Even without additional prompting, the annual running of the Derby inevitably engenders stories about the abuses suffered by racehorses, their general mistreatment, and post-retirement plights. These stories reached a fever pitch several years ago after Derby winner Barbaro was euthanized after developing severe complications from a leg fracture.

Without a doubt, some racehorses are mistreated by their owners or trainers. There is reason to believe, however, that gross mistreatment of racehorses is not as pervasive as many think. In fact, we may very well expect that racehorses are treated better than their less athletic counterparts.

How can we be so sure? It’s economics.

First, consider why individuals own racehorses: They’re an investment for their owners.

People typically think that most of the money from horseracing comes from the races themselves. While each race does have a monetary payout or “purse” for the top finishers, these winnings often don’t yield much profit. By the time an owner deducts jockey and trainer fees, the remaining winnings are often not enough to cover a horse’s boarding and upkeep costs.

So where does the money come from? Racing stallions—male horses of breeding age with a winning record — can command impressive “stud fees” when their owners breed them with female horses. Stud fees can reach $100,000 each time an owner breeds his horse. It’s reported some highly successful racehorses command stud fees of over $500,000 per mating. When you consider that a single stallion can breed with or “cover” 140 broodmares (female horses) a year for several years—that’s a lot of cash.

Other sources of income for those in the racing game include buying and selling horses. Owners may “pinhook” horses—buying the animals when they are relatively young, provide some training, and then resell them. Older horses can also be sold to new owners either as running horses, potential breeders, or for other types of equestrian sports. The payout can be substantial.

So put yourself in the shoes of an owner. After forking over tens of thousands, perhaps millions of dollars, do you think you’d be inclined to abuse your racehorse? Are you inclined to let other people, like a trainer, abuse or otherwise jeopardize your investment? No! A poorly maintained horse isn’t likely to bring a good return in any of the ways listed above. Owners face a strong incentive to ensure that their horses are well cared for and maintained.

But what about doping? Does the desire to win push trainers and owners to pump their animals full of performance-enhancing drugs? No one is naïve enough to think that doping never occurs—but it’s likely not as common as portrayed. Consider recent data from one international oversight body. Out of nearly 100,000 drug tests, the agency found a “clear rate” of 99.4 percent. While it’s unlikely every instance of doping was caught, this data flies in the face of the narrative that horses are being constantly drugged.

And for those that get caught, there are consequences. Bob Baffert is currently under suspension from Churchill Downs. A French trainer was recently banned until 2025 for doping violations. The Horseracing Integrity and Safety Act, passed in late 2020, will soon impose uniform standards for medication and safety protocols across the country.

Doping horses, high rates of injury, and maltreatment have other negative consequences as well. With calls to ban the sport outright, those within the industry face a strong incentive to ensure that the animals involved are well-treated. To do otherwise would put their sport, and all the 1.74 million jobs associated with it, in jeopardy.

None of this, however, addresses another critically important fact: For many in the racing industry, horses aren’t just investments. You’d be hard-pressed to find someone who spends significant time around horses that doesn’t see them for what they are—smart, powerful, and truly beautiful creatures. When it comes to taking care of their animals, they aren’t horsing around.