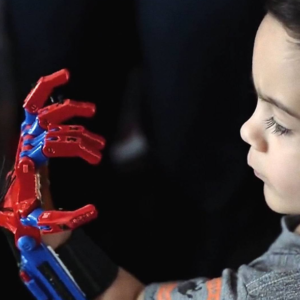 A Hand for Innovation — Ivan Owen, Jon Schull and e-NABLE

One corner of health care — prosthetic hands — exhibits unfettered innovation, wild and manic, like the proliferation of web apps. The magic is that these hands lie just beyond the regulations that choke most of health care.

Before 2013, if your child was born without a hand, prosthetics capable of grasping a glass or riding a bike were expensive ($5,000 or more) or unavailable. Most children had to wait until late teens, as few families could afford to replace prosthetics every few months as children outgrew them. This meant growing up with a disability, plus the psychological pain of being the kid with the strange limb.

The spark began in South Africa, where a carpenter, Richard Van As, accidentally sliced off several fingers. While awaiting treatment in the emergency room, he decided something good would come of this tragedy. Professionally manufactured prosthetics were a financial stretch for Van As, and his particular wound was a difficult fit for commercially made models.

He contacted Ivan Owen, a Bellingham, Washington, puppet-maker, known for building intricate hands. About 10,000 miles apart, they collaborated by email and Skype to develop an inexpensive substitute. Their initial focus was on creating a single mechanical finger, which they built using common workshop tools and components found at hardware stores.

Soon, a South African mother saw the Owen-Van As hand on YouTube and asked if they might build one for her 5-year-old son. Inspired by a 19th-century metal-and-whalebone design, they used 3D printing to construct a 21st-century version. Their first version cost around $150 in materials, plus eight hours assembly time. They released the design files for this hand into the public domain, igniting a Cambrian Explosion of design. In the United States, the laborious task of matching those who needed hands (users) with those could build them (makers) crept along until Jon Schull, a professor at Rochester Institute of Technology, established a Google Plus group to match users and volunteer makers. Thousands around the globe signed up. Jon’s social media site grew into a volunteer movement called e-NABLE.

With this invention, the cost of a workable prosthetic plunged overnight by more than 99 percent. 3D-printed models weren’t the same as $5,000 models, but they were functional and so inexpensive to build that makers could give them to users free-of-charge.

Working together, users and makers modified designs. The original boxy-looking hand became sleeker. Time-consuming nuts and bolts gave way to snap-on joints, and the total cost dropped to as little as $35 in materials for some designs.

As important, hands became works of art. Children participated in the design process, requesting favorite colors and modeling many after movie superheroes like Spider-Man and Captain America. The child with the weird hand suddenly became an icon — the kid whose friends with normal hands wanted superhero limbs, too.

At high schools and colleges, prosthetic-making became a popular endeavor. Users and makers realized that prosthetics need not replicate the human hand. One father, wanting his son to have better grip, built a hand with two thumbs — one on each end. His son, fortuitously named Luke, became “Cool Hand Luke.” Others built hands custom-designed for specific purposes — bike-riding, rock-climbing, trumpet-playing.

Three years into this process, the family tree of 3D-printed prosthetics has branches stretching every which way. The key ingredient in this process is what my colleague Adam Thierer calls “permissionless innovation.” A maker doesn’t need a license or approval to innovate. So, unlikely participants collaborate — artists, children, doctors, tinkerers, engineers. They can do so quickly and inexpensively. Novices make discoveries that professionals miss. A hand with a rotating wrist came not from a professional-model manufacturer, but rather from a college engineering student.

For now, the e-NABLE tree is pruned by regulation. If makers added sensors or motors to the hands, or if they sold them rather than giving them away, they would likely fall under Food and Drug Administration regulation — with innovation facing slowdowns, high expenses and bureaucratic uncertainty. Today, some of the fastest innovation in 3D-printed prosthetics occurs in Colombia and Paraguay, where the regulatory environment is especially conducive.

Going forward, a great public policy question in health care — perhaps the great question — will be how much leeway people have to innovate. Our lives depend on the answer.