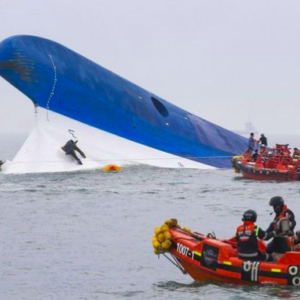 The sinking of the South Korean ferry the Sewol, 2014.
[IS] Opinions

SEOUL — The sinking of the South Korean ferry the Sewol five years ago in treacherous currents off the country’s southern coast was one of the great tragedies of Korean history. The memory for me is especially poignant since I spent hours in the spacious school gymnasium where families of the 304 victims, most of them middle school students, were waiting endlessly for terrible news they never wanted to hear.

I remember the prolonged silence that hung over the room, then the outbursts of shrieks, of tears, of bodily contortions, as the news was broken to one family or another that the remains of their precious child had been recovered. The longer the wait, the less chance there would be more survivors. Finally, there was none.

Faint hope sprang eternal, however, as families prayed that maybe their sons or daughters had found safety in an air pocket, maybe hidden in small corners of the submerged vessel, or that some child had actually gotten out but had yet to find his or her family. As chances of a reprieve from the awful news diminished to zero, however, families gradually lost the slender hopes to which were clinging. Several of the bodies would never be found, at least until the boat was raised from the swirling currents much later, but the dimensions of the tragedy were clear within two or three days after the ship had sunk.

In the midst of these deeply saddening memories, it seems unbelievable to think that political forces, on both the right and the left, should have hijacked the tragedy for their own purposes.

Quite often, after visiting the tents set up in central Seoul by bereaved relatives in front of the great statue of Admiral Yi Sun-sin, Korea’s 16th century naval hero, I would pick up the yellow-ribbon pin that family members offered to visitors as symbols of the tragedy. The setting for their rows of tents seemed appropriate considering that Admiral Yi had died fighting off a marauding Japanese fleet not far from where the Sewol went down.

Imagine, then, my chagrin when quite quickly the yellow ribbon came to represent the pressure of leftists to castigate the Korean government and the system that had enabled the owner of the Sewol to overload a vessel that should never have set sail on its final voyage, bound for Korea’s southernmost province, the scenic island of Jeju.

Sometimes, as I walked on down the broad avenue toward the statue of King Sejong, people asked why I would stick the yellow pin into the lapel of my jacket when it was identified with leftists exploiting the tragedy. When I explained that I wore it not as a political symbol but as a tiny way of memorializing the lives that were lost, no one seemed to believe me.

In fact, leftists did seize upon the Sewol tragedy to promote their agenda. That was understandable considering the links between the owner of the Sewol and corrupt officials. Rightists, however, have charged that the left has abused the tragedy, taking advantage of grieving parents about whom they care little.

That was also understandable, The tents of the family members had been there long before the Candlelight Revolution that upset the conservative government ebbed and flowed up and down the same avenue, but it was difficult to separate that protest from the much larger outcry. We still do not know why the president, Park Geun-hye, later impeached, ousted and jailed, had been out of sight for hours as images of the slowly sinking Sewol filled TV screens.

Whatever the politics, though, the sinking of the Sewoil, with its teen-age students on board, bound for a school holiday on Jeju, has an enduring place in South Korean history. Until the 2018 Pyeongchang Olympics and then the summits between Kim Jong Un and Park’s liberal successor, Moon Jae-in, and between President Trump and Kim swept the headlines, the sinking was about the biggest story to emanate from Korea in years.

It’s not quite clear to me how Korean officials persuaded the Sewol parents and relatives to fold up their tents and leave the vigil they had maintained for five years, but their space is now empty. Probably an overwhelming factor was the promise that the Sewol victims would never be forgotten, that their story would endure in history while their families would be compensated. The government, moreover, has promised to build a special memorial for Sewol victims where parents had taken turns handing out leaflets and pins and attending religious services under Admiral Yi’s watchful eyes.

That would seem like a fair resolution, one that both left and right should think was good enough if not exactly ideal. The memorial is to occupy the same space as had the tents, an enduring reminder of what had happened, a protest against high-level indifference to the needs and concerns of humble people, many of whom would never otherwise find the time and money to look around Jeju.