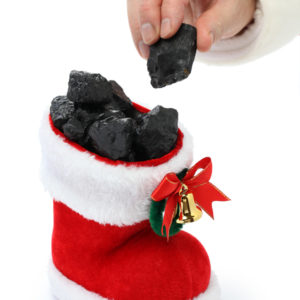 A Lump in Their Stocking … and a Present for America

Crony capitalism got a lump in its stocking from President Trump over Christmas. And Democrats had to say thank you!

That’s not how it was reported, of course.

The GREEN Act’s various incentives also include money for “environmental justice programs” at colleges and universities. Your tax dollars at make-work.

Its main sponsor, Democratic Rep. Mike Thompson of California, described all this as “a comprehensive approach to addressing the threat of climate change through our tax code.” Courtesy of the president’s pen, the GREEN Act’s “comprehensive approach” expired along with 2019.

Also kicked to the curb was an extension of the solar investment tax credit and the federal tax kickback of $7,500 to buyers of electric cars, funding for which likewise ran out with the calendar year. The EV kickback is considered by most industry experts to be crucial to the success of electric cars, which only sell when people are paid to buy them.

When Denmark rescinded its subsidies for electric cars, sales of electric cars collapsed by more than 60 percent.

Trump’s rescission of the EV subsidy here is likely to have a similar effect. Even for the affluent, who are the majority of EV buyers (precisely because EVs are expensive, even with all the subsidies) having to spend $7,500 more for an EV gives pause.

At least taxpayers will get a pause — and not only from having Elon Musk’s hands perpetually in their pockets. The rescission of incentives for energy-unproductive wind farms and solar boondoogles (Musk has his hand in that honey pot, too) will make their energy-inefficiency all the more obvious.

It’s hard to dig holes in the ground and fill them back up when there’s no more money for the shovels. The president just rescinded the shovel.

House Democrats could have gone to the mattresses and refused to agree to the $1.37 trillion spending deal finalized in December — thereby protecting their “investment.” As well as the investment in them, made by green campaign contributions.

But that would have resulted in a government shutdown just in time for Christmas. For which the Democrats would have had to take credit, annoying their base at just the moment when they need maximum political support for their effort to rescind the president,  via impeachment.

It’s a tactical victory that could turn strategic for Republicans if the president isn’t rescinded. His actions threaten not merely the investment in green alternatives but implicitly the premise justifying them as essential in order to stave off the climate crisis.

Which is supposed to be upon us by 2030, date certain. That’s now less than a decade away, and with each passing year the crisis seems more hype than existential.

The longer action is delayed, the less necessary it becomes.

“It’s unfortunate the White House crushed …” the various incentives for wind farms, solar power systems and electric cars, said Stephen Irvin of Amicus Solar, which is amicably inclined toward the incentives because it receives them. Amicus Solar will now have to try to find customers willing to spend their own green, rather than extracting green from unwilling taxpayers.

Much wailing and gnashing of teeth has resulted from the president’s actions and from what is perceived as the inept actions of House Democrats.

The Union of Concerned Scientists expressed concern over the president’s decision.

Of more interest, though, is the lack of concern expressed by some of the president’s own elves — including Treasury Secretary Steven Mnuchin — for the cashing in on the climate crisis by crony capitalists such as Irvin and Musk and a litany of others who have used “concern” for the green to line their pockets with it.

According to people familiar with internal White House back-and-forthing over the deal, Mnuchin had signed off on the perpetuation of payola. This being of a piece with the reluctance of many House (and Senate) Republicans to question the basis for this payola.

But the president used his pen to rescind the GREEN graft — and the EV grift — contrary to the wishes of the Amen Chorus within his own party and (apparently) several of his own advisers, including Mnuchin.

Trump’s actions are of a piece with his earlier actions — including his decision to pull the United States out of the Paris Climate Accords, which would have imposed crippling costs on Americans for the sake of affluent and politically connected crony capitalists like Musk and Irvin.

By having the guts to question the existence of a climate crisis — and daring to touch what has become the fourth rail of American politics — President Trump may have just prevented an actual crisis:

The implosion of the American economy.