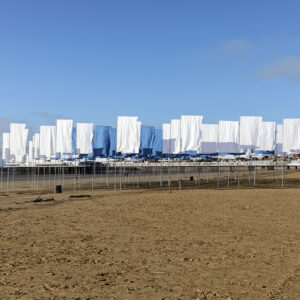 A Memorial Gone Away Too Soon

For those who couldn’t visit the COVID-19 memorial on the National Mall in Washington, the next best view was provided courtesy of National Geographic magazine.

Photographer Stephen Wilkes perched himself on a platform lift 45 feet above a sea of white flags that together resembled a blanket of snow. For 30 hours on 20 acres on the north side of the Washington Monument. He positioned the platform lift with the National Museum of African American History and Culture on the left of the frame because so many people of color were disproportionately caught in the throes of the virus.

A total of 700,000 white flags to remember the number of Americans who died from COVID-19.

On the last day of the memorial exhibit (Oct. 3), Elizabeth Castro of Lorton, Va., told InsideSouces, “This is a humbling experience. It brings new meaning to the pandemic. Very solemn. Notice how quiet it is here.”

Castro originally is from Texas. She moved to Virginia from Japan last year with her Marine Corps husband, who now works at the Pentagon. “That was tough,” Castro recalled. “Moving during a pandemic.”

She said she knows 10 people who died from coronavirus. That was tougher.

That’s why she recorded a video at the Mall, saying, “It’s a similar feeling to visiting Arlington National Cemetery.”

And for the ones who had it — and survived?

“People don’t want other people to know if they had COVID,” Castro said. “It’s a stigma.”

But there is one lingering thought in her mind. Why only 17 days, from Sept. 17 to Oct. 3, to allow people to walk through the maze of white flags on the Mall, some of which featured inscriptions that said if only you would have listened, or I wish you had gotten vaccinated.

That’s a good question: Why not longer, such as to Thanksgiving or the end of the year. Let as many people see it as possible, such as hardcore anti-vaxxers. The Vacillators.

Including NBA player Andrew Wiggins, of the Golden State Warriors.

Wiggins finally conceded and got vaccinated, noting that he felt “forced” and that “the only options were to get vaccinated or not play in the NBA.”

And miss that humongous salary?

Said Wiggins, “I feel like I could go on for days about why I didn’t want to get it. Most importantly, I don’t know what’s going to happen or what it’s going to do to my body in 10, 20 years. . . But I guess it’s something that had to get done.”

As Academy Award-winning actor Sean Penn said on Michael Smerconish’s eponymous show on CNN: If their kids already have a measles vaccine, that on its own should deny a religious status dodge.

Wiggins got his jab — and gets to keep all his $31 million in yearly salary.

Meanwhile, on Oct. 11, 1987, a team of 48 volunteers carefully unfolded 1,920 panels of the AIDS Memorial Quilt, the largest previous artistic display on the Mall.

Suzanne Firstenberg, an acclaimed artist, is known for her colorful hats. She also is known for designing the Mall display. She added 40,000 white flags since the first day, Sept. 17, a figure she didn’t expect to reach. But sadly, she did.

The more than 150 sections of white flags featured three miles of walkways, with much of the grass trampled. There were about 75 rows of flags, with about 55 flags in each row per section.

“The flags have provided compassion, provided solace,” Firstenberg said in her closing speech on the Mall as dusk approached on Oct. 3. “Some people told me the flags gave them peace. We just can’t keep driving by. We need to stop and learn the stories.”

Firstenberg said every flag will be carefully gathered by her volunteers, documented, and moved to her studio.

One message on a flag appeared to be written by a young Black daughter. A photo of her, posing happily with her smiling father was attached to the metal stem.

It read, “Together again in D.C. Dad. I want you to know I’m doing the best I can. But you said that was alright with you. Be sweet Dad!”

It was in Section 77 of this vast COVID-19 memorial on the National Mall.